OF COURSE Coffman Wants Tancredo To Primary Him 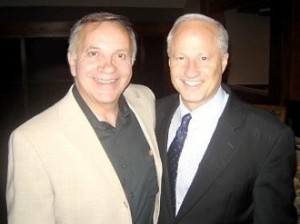 As 9NEWS’ Brandon Rittiman reports, the dudgeon is getting deep between Rep. Mike Coffman and his sort-of (as we’ll explain) predecessor in Congress, anti-immigrant firebrand Tom Tancredo–so deep, in fact, that it’s getting a bit silly:

Rep. Mike Coffman (R-Colorado) picked an unusual fight Monday: he wants another Republican to challenge him in next year’s primary election.

Not just any Republican. Coffman wants to do battle with Tom Tancredo—the firebrand conservative former congressman who used to occupy Coffman’s seat in the House of Representatives.

“Come after me,” Coffman said to Tancredo in an interview Monday for Balance of Power. “We could define what the Republican party is for a generation to come.”

Coffman says he decided to propose the challenge after a recent 9NEWS interview in which Tancredo defended a group called VDARE, which serves as an online platform for racist and white supremacist viewpoints…

Although Coffman technically holds Tancredo’s former CD-6 seat in Congress, the major omission from this story is the fact that the district was totally redrawn in the 2011 redistricting process. Where CD-6 used to be an impregnable Republican stronghold, tolerant and even happily supportive of Tancredo’s immigration demagoguery as it made Tancedo persona non grata at the pro-reform Bush White House, after 2011 it became a highly diverse and competitive district with a large immigrant population.

The dramatic reshaping of Coffman constituency, all sides agree, is the catalyst responsible for Coffman’s “evolution” on immigration reform from a hard-liner doing his best to keep up with Tancredo–once calling the DREAM Act “a nightmare” and telling bilingual voters to “get a dictionary”–to one of the most often-cited examples of a “pro immigration reform” Republican and supporter of the same DREAM Act-eligible immigrants he once derided.

Where Coffman’s defenders and detractors disagree is whether that evolution is legitimate. Did Coffman really have a heartfelt conversion on the issue of immigration, or was his evolution nothing more than political theater to survive redistricting?

Asked if he was implying that Coffman is a RINO (a political pejorative that stands for “Republican In Name Only”,) Tancredo went further.

“[Coffman] is a turncoat, not a RINO. He is unprincipled,” Tancredo said. [Pols emphasis] “What does he care about the Republican party? He’s moved as far away from it as he can in the last several years.”

For activists focused on protecting immigrants and Democrats working toward the same goal in Congress, praising every feint by Coffman in their direction is obligatory. They have no incentive to question Coffman’s honesty, not when his vote is urgently required to achieve success. Unfortunately, Coffman’s personal lip service to some allegedly common goals with immigration reform activists has not in all these years resulted in anything like tangible progress, primarily due to Coffman’s Republican leadership in Congress failing to share his newfound priority. As a result, Coffman has gained credit as “supporter” of immigrant rights without having to deliver any results–and even while continuing to support GOP leadership that obstructs his professed agenda.

And yes. To everyone who believed what Coffman said before 2011, like his predecessor in Congress, he’s just “unprincipled.” There’s no reason for the right to buy any of this “evolution” business, not when redistricting fully answers the question in simple Machiavellian terms they can easily understand.

Coffman knows that Tancredo could never beat him in the new CD-6, even in a GOP primary. That’s why Coffman has nothing to lose by throwing out this worthless challenge, which superficially bolsters his revamped image. But if the clock could be turned back to the old CD-6, the deep-red stomping ground Tancredo bequeathed Coffman in 2008…?

That would be a different story. And quite possibly a whole different Mike Coffman. Which is Tancredo’s whole point–and one that liberals and conservatives should consider. Sometimes it takes polar opposites’ experience to understand how both sides have been getting screwed.