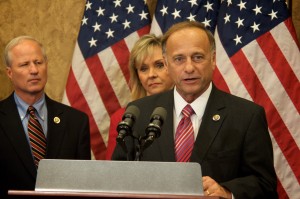 As the debate over immigration policy in the United States endures the hard shake of President Donald Trump and the hard-line slate of policies he promised on the campaign trail, fellow Republicans hoping to chart a politically survivable path through the chaos on this explosive issue are having a very difficult time. Nationally one of the most frequently-cited examples of this is Rep. Mike Coffman of Colorado, whose “evolution” on immigration since redistricting forced him out of Tom Tancredo’s old constituency and now placing Coffman necessarily at odds with Trump’s plans for a sweeping crackdown on undocumented immigrants.

Except, as Real Clear Politics reported over the weekend, maybe that’s not true? Does Coffman actually see Trump as a savior on immigration?

Rep. Mike Coffman, who represents a swing district in Colorado and has been a strong supporter of protecting Dreamers, said Trump might be able to convince even his most conservative supporters to back such a deal.

Subsequent to the announced deal with congressional Democratic leadership and the Trump administration on protecting Deferred Action for Childhood Arrivals (DACA) program beneficiaries, there’s been an uptick in speculation about the possibility that a President elected on what can be accurately described as the most anti-immigrant platform in modern history might be able to broker a grand bargain on the issue–to include resolution of status for all undocumented immigrants in the United States and “border security” consistent with keep Trump’s promises to build a wall on the southern border. Since that time, as Trump sought to reassure his base that he wasn’t “caving” on the campaign’s hard line, much of that confidence has dissipated. Negotiations are nonetheless reportedly ongoing this week, and we’re all obliged to wait for news there.

In the meantime, this is another chance to remind readers that Coffman’s fate is linked to that of the Trump administration–on immigration as just one of a range of issues, and Coffman has done it to himself. This is a man who dramatically outperformed in a district that Trump lost handily by brazenly triangulating off Trump’s various offenses. And now he says it’s Trump who has credibility on immigration? In fact, Coffman says, Trump is the only Republican who can get immigration reform done? Is that what the ticket-splitters in CD-6 expected?

All we can say is, remember this moment.