UPDATE: You may have noticed that the deadline dates listed in the draft bill in question (below) erroneously state 2017 as the coming legislative year. Since this legislation was filed last week, it’s obviously intended for the 2018 legislative session.

Thus illustrating again that errors, you know, happen. And then we fix them.

As we reported earlier today, Gov. John Hickenlooper has called a special session of the Colorado General Assembly to convene early next month for the purpose of remedying a drafting error in Senate Bill 17-267: the large-scale bipartisan fiscal bill that averted large cuts to the budget this year, and in particular protected rural hospitals from possible closure. Although this language fix would save Denver RTD and the metro Scientific and Cultural Facilities District (SFCD) from millions of dollars in unexpected cuts due to marijuana tax revenue they would not receive, Republicans appear to be rallying against making the fix–preferring instead to blast Hickenlooper for the “waste” of calling a special session to deal with the problem.

But we just found out something very important. Republicans already know about the problem. 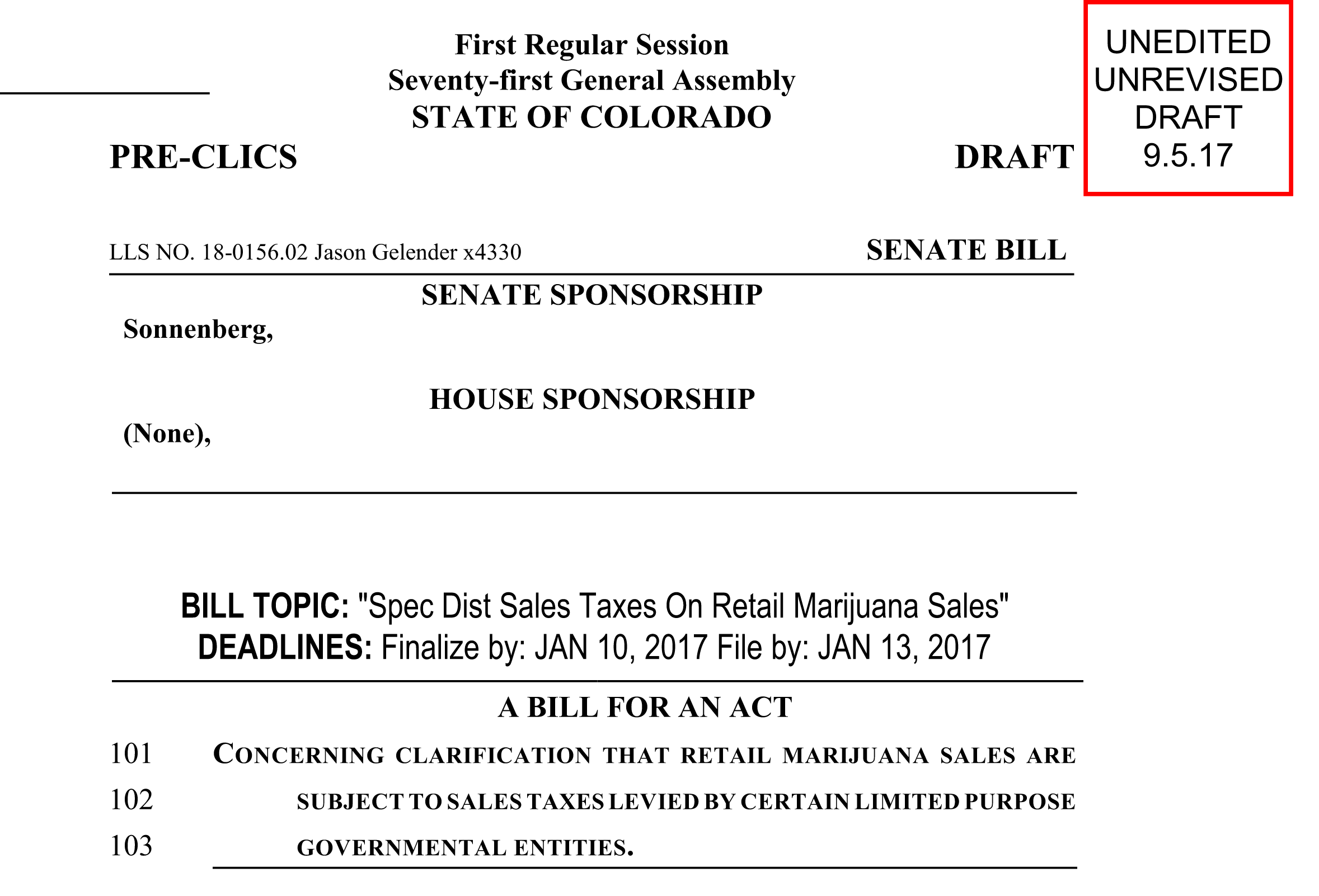 This is an excerpt from a draft bill filed by GOP Sen. Jerry Sonnenberg on September 5th. This draft legislation appears to accomplish the aim of the special session–ensuring that special taxing districts like RTD and SFCD can continue to levy their marijuana sales taxes even after the legislature exempted marijuana from the state’s regular sales tax:

Because state law specifies that the regional transportation district (RTD), the scientific and cultural facilities district (SCFD), and a health services district (HSD) may levy sales tax only on transactions upon which the state levies sales tax “pursuant to the provisions of article 26 of title 29. C.R.S.”, the exemption of retail marijuana sales from the general state sales tax had the unintended consequence of exempting such sales from RTD, SCFD, and HSD sales taxes even though the state continues to levy the retail marijuana sales tax pursuant to article 28.8. of title 39, C.R.S. In addition, other statutes that authorize certain special districts and authorities to levy sales taxes only upon transactions upon which the state levies sales tax but do not specifically reference article 26 are sufficiently ambiguous that they could also be interpreted to no longer authorize those special districts to levy sales tax on retail marijuana sales.

The bill clarifies that retail marijuana sales are subject to RTD, SCFD, and HSD sales taxes as well as other potentially affected special district and authority sales taxes.

Folks, this is the objective of the special session–to correct this exact error, and ensure these monies continue to flow to these special tax districts. To fail to pass this fix bill as quickly as possible will mean lost revenue for these entities. That’s why Gov. Hickenlooper called the special session.

Obviously, the fact that Republicans not only knew about this problem, but had already filed a draft bill for the 2018 legislation to address the problem, severely undercuts their feigned outrage over being called back to address it sooner–and it means they should have no problem supporting the bill whenever they get it. We have no idea how they intend to respond to the charge of blatant hypocrisy and political posturing here, but it’s one of the more egregious cases we’ve seen in recent memory.

In fact, this is exactly the kind of nonsense that makes the voting public hate politics.