Trump Gets Much Love For Working With Dems 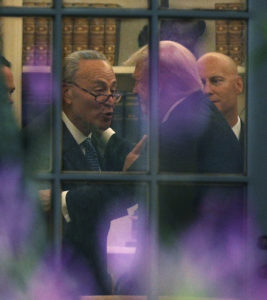 Chuck and Donald hug it out.

Many Republicans were furious with President Donald Trump’s budget deal Wednesday, stunned that the president quickly gave in to Democratic demands to pair hurricane relief with a three-month debt limit hike — though getting nothing in return.

But in calls with Senate Minority Leader Chuck Schumer and House Minority Leader Nancy Pelosi Thursday morning, Trump raved about the positive news coverage it had received, according to people familiar with the calls, and he seemed very pleased with his decision…

“He seemed super upbeat,” one person familiar with the calls said.

Another person familiar with the calls said Trump told Pelosi her coverage was even better than his. “The press has been incredible,” Trump said.

As President Donald Trump has languished under a continuous barrage of negative headlines since taking office–made much worse by the continuous failure of the GOP-controlled U.S. House and Senate to accomplish basic stated priorities like the repeal of the Affordable Care Act–we’ve been wondering when Trump might make an end run around dysfunctional GOP congressional leadership and approach Democrats to get something done. Trump’s conservative ideology is not believed by anyone to be deeply held, and he could be willing to step well outside his party’s comfort zone in order to make deals that keep the government running.

The simple fact is that Trump has got nothing to lose by engaging Democrats–certainly not the loyalty of a party that has repeatedly abandoned him, only to come crawling back once Trump prevailed. But Trump does have support to be gained beyond his blindly loyal base, who would in large numbers follow him out of the Republican Party in the unlikely event he were to leave it. Either way, with public opinion turning against the Republican agenda on everything from health care to immigration, Trump has an unknown but potentially vast range of headroom if he decides to shift his agenda leftward.

We’re pretty sure there’s no better way to encourage that than giving a guy like Trump good press.