It Didn’t Have To Be This Way: Rep. Mike Coffman’s Original Sin 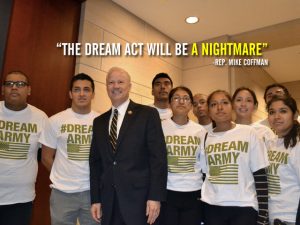 With increasingly official word from the White House yesterday that President Donald Trump does indeed intend to rescind the Deferred Action for Childhood Arrivals (DACA) program created by President Barack Obama to protect undocumented immigrants who came to the United States as children from deportation, Republicans can be divided into two camps: those who enthusiastically support this harsh crackdown on the least offending group of undocumented immigrants, and every Republican who has at any point been forced to acknowledge a humanitarian interest in protecting this population–which is most Republicans who run in politically competitive districts and states.

Colorado has prominent Republicans in both of the aforementioned camps, from nationally infamous anti-immigrant firebrand Tom Tancredo to GOP politicians considered today to be key “moderates” on the issue like Rep. Mike Coffman. Coffman, as we noted last week when word initially broke of Trump’s intention to end the DACA program, is hopinh to use an uncommon legislative maneuver with hoped-for Democratic support to force a vote on legislation to temporarily continue most DACA protections.

Mike Coffman’s public transformation from the Republican congressman who literally inherited Tancredo’s deep-red district into one of the GOP’s foremost alleged proponents of the rights of immigrants all goes back to the 2011 redistricting cycle, which redrew Colorado’s CD-6 into a diverse and competitive battleground district centered on the city of Aurora. Prior to redistricting, Coffman did his level best to keep up Tancredo’s anti-immigrant rhetoric–declaring in 2010 that “the DREAM Act will be a nightmare for the American people.” Then, after nearly losing his seat in 2012 to an underfunded challenger, Coffman began a public about-face the following year that outraged suspicious Democratic opponents but slowly began to win over the media.

In 2013, Coffman had the chance to take immigration off the table as a political issue, and participate a monumental bipartisan victory on immigration. We’re referring to the Border Security, Economic Opportunity, and Immigration Modernization Act of 2013, which passed the U.S. Senate with a huge 68-32 margin of victory–and then died with the Republican-controlled House refusing to move the bill forward.

And who was right there on the same page with House Speaker John Boehner? Rep. Mike Coffman:

“I disagree with the Senate bill,” Coffman said April 25. “What Boehner has said, and I agree with, is that a comprehensive approach doesn’t have to be a comprehensive bill. We’re going to do step-by-step approach with individual bills on individual subject matters. The subject that I’ve taken up is on the military, but that’s certainly not the end all on immigration reform.”

Coffman said he doesn’t support a special path to citizenship for adults in the country who knowingly illegally immigrated to the country, contrary to one of the Senate bill’s main tenants and a contentious topic between Republicans and Democrats… 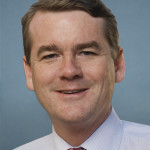 There are a host of reasons why the hard-won 2013 compromise from the U.S. Senate on immigration reform died as soon as it was sent to the House. One of the biggest, undeniably, was a perceived need to deny President Obama–who Coffman claimed in 2012 “is just not an American”–even the smallest of political victories. Sen. Michael Bennet of Colorado, one of the architects of the Senate bill, has called again this year for Congress to pass his bill; but the idea that today’s GOP-controlled Congress can pass anything even remotely close is wildly unrealistic.

And this is critical to understand: in May of this year, Coffman welcomed the Trump administration’s actions on immigration overall–as a matter of principle and as a catalyst for action in Congress:

Coffman said immigrants in his district “should be concerned” about increased enforcement under the Trump administration.

At the same time, Coffman defended the Trump administration’s actions.

“Where the burden falls right now I think is not on this administration. [Pols emphasis] This administration is enforcing the law,” Coffman said. “They’re making both sides uncomfortable in Washington, D.C. by enforcing the rule of law. Before, it wasn’t enforced– or it was selectively enforced, and both sides were complacent on the left and the right. Now, I think neither side can be complacent.”

“[President Trump] is lighting a fire for Congress to act,” Coffman said.

If you apply these comments in May to what Trump is doing now, you would very reasonably conclude that Coffman supports Trump ending the DACA program instead of wanting to preserve it! Coffman tries to reconcile this sleight of hand by arguing DACA wasn’t passed by Congress, forgetting to mention that the GOP-controlled Congress could never pass the equivalent DREAM Act without Democratic support–and the GOP’s so-called “Hastert Rule” informally requiring legislation to have the support of “the majority of the majority” made that an impossible task. If Coffman does manage to succeed in forcing a vote on this three-year extension of DACA, win that House vote, get the bill through the Senate, and somehow persuade a famously egotistical President Coffman said in a campaign ad last year he doesn’t “care for much” to sign a bill undoing a central campaign promise…

You know what, folks? We don’t even need to speculate about that at this point. If it happens, great–Coffman will have accomplished a tiny sliver of the reform needed, years after it could have happened. In the much more likely event that Congress accomplishes nothing once again, the only thing that will matter is this: Coffman is part of the Republican majority who either helped Trump or failed to stop him. Worse, Coffman had the chance to take this issue off the table years ago, and he refused.

Either way, these are not the actions of “a hero.” This is a man dodging fate.