As you may have noticed, your hosts were a little busy yesterday morning doing all of the non-bloggy things we do, and didn’t have a chance to get some posts going until the early afternoon. 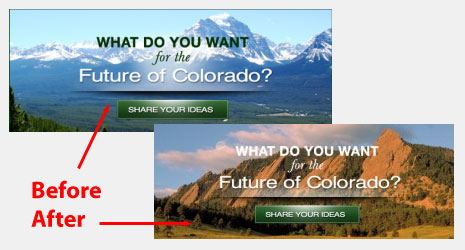 Hours after launching his campaign Web site to much fanfare, official Republican gubernatorial hopeful Scott McInnis yanked from the site a prominent graphic featuring a vista of Lake Louise, a resort nestled in the Canadian Rockies. The Canadian terrain appeared behind the question, “What do you want for the future of Colorado?”

Soon after bloggers uncovered the geographic blooper, lovely Lake Louise vanished from the McInnis site, replaced with background shots of the Boulder Flatirons.

Intrepid contributors to the political blog Colorado Pols uncovered the McInnis campaign’s graphic mixup Thursday afternoon. After speculating the range might be the result of creative Photoshopping, and then discarding the possibility it portrayed a seldom-seen view of Mount of the Holy Cross or Maroon Bells, a blogger using the name johnpauljones found images of the mountain range McInnis used…

McInnis’ misplaced mountain echoes a famous snafu from a little over a year ago when Republican Senate candidate Bob Schaffer had to pull his inaugural campaign commercial when bloggers discovered it featured Alaska’s Mount McKinley rather than Pike’s Peak. Schaffer campaign manager Dick Wadhams blamed the mistake on a Washington, D.C.-based media consulting firm.

McInnis made waves right before the election last fall when he told The Colorado Independent he would have done a better job than Schaffer did in the U.S. Senate contest against the eventual winner, Democrat Mark Udall. “I would have beat Udall, that wasn’t the issue,” McInnis said.

That’s what he says, but it looks to us like McInnis is following Bob Schaffer’s campaign kickoff playbook–from the self-destructive and ridiculous “shadow campaign” to this really bizarre inability to proof non-Colorado mountains out of one’s campaign materials before they become the joke of the week–with deja vu-inspiring precision.