Ex-Jeffco school board member sounds the alarm on “Spiritual Warfare”

(At least she’s not your school board member…anymore! – Promoted by Colorado Pols) 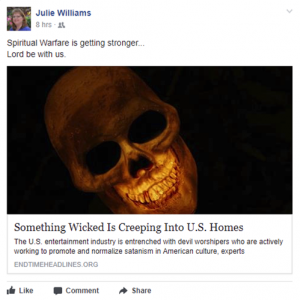 Back in 2015, before conservatives were removed from the Jeffco School Board, the Independence Institute’s Dave Kopel, a conservative, made the memorable observation that school board member Julie Williams got the “rest of the board into trouble with a lot of  foolish, barely thought-out ideas she has expressed inappropriately.”

She’s still saying such things, as evidenced by a Facebook post last week, obtained by a source.

Williams posted an article headlined, “Something Wicked Is Creeping Into U.S. Homes,” which stated, “The U.S. entertainment industry is entrenched with devil worshipers who are actively working to promote and normalize satanism in American culture.”

Williams commented, “Spiritual Warfare is getting stronger…Lord be with us.”

It’s not known if she would have wanted to put more emphasis on the alleged threat posed by lurking devil worshipers who might want to normalize satanism in Jeffco.