Monica Duran Saddles Up For HD-24 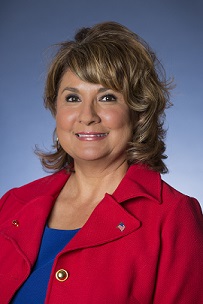 More 2018 state legislative news we wanted to be sure got a mention–after Rep. Jessie Danielson announced this week that she will run to succeed Sen. Cheri Jahn in suburban Jeffco’s Senate District 20, Wheat Ridge City Council Member Monica Duran announced her intention to run for Rep. Danielson’s House seat–and received Danielson’s support right out of the gate:

“I’ve known what it means to be a woman struggling to put food on her family’s table,” said Duran, a Democrat. “I am running for state representative because we need leaders who will work to level the playing field so that more working families in Colorado are able to build secure futures – when so many are living paycheck-to-paycheck.”

Current District 24 State Rep. Jessie Danielson immediately lauded Duran’s entry into the race. “Monica Duran has been a tireless champion for her community and our progressive values. She knows the challenges working families face day-to-day, because she has lived them. As a domestic abuse survivor, Monica will be able to give voice to all too many voiceless women,” said Rep. Danielson, who is also the House Speaker Pro Tempore.

Crisanta Duran, Speaker of the House, extended her immediate endorsement as well. “What Monica Duran has done for her community speaks volumes,” said Speaker Duran. “It shows us that she will be a leader who will fight for her district and protect Colorado for future generations.”

Danielson’s seat is a little more comfortable for Democrats to hold than other swing Jeffco legislative districts, but Republicans reliably field a challenger so the district does get some attention every election. With both House Speaker Crisanta Duran and the incumbent representative closing ranks behind Monica Duran, we expect she’ll win the nomination without much fuss–helping keep this open seat off the GOP’s opportune target list.