"Where I'm concerned right now is members of Congress who want to do away with Medicaid expansion," says Rep Mike Coffman of Colorado.

(Earlier in his tele-town hall he said he supported AHCA and wasn't troubled by Medicaid changes becuz he thought states could handle it) https://t.co/MQix4muv6x

File under “clear as mud.” 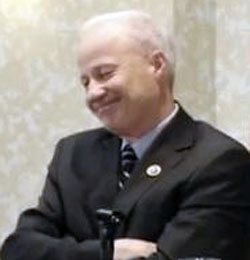 9NEWS’ Brandon Rittiman reports–remember five days ago when Rep. Mike Coffman committed to supporting the GOP’s American Healthcare Act “in its current form?” Staking out his position right before the Congressional Budget Office released its damning estimate of 24 million more people without insurance than under the Affordable Care Act?

Yeah, forget all that:

“Rep. Coffman is reviewing the [Congressional Budget Office] analysis to see what areas of the American Healthcare Act need adjustments before a final bill is enacted,” spokesman Daniel Bucheli wrote in an email to 9NEWS. “But he is encouraged that the bill leaves in place the consumer protections, such as preexisting conditions and allowing dependents to remain on their parents’ plans until age 26, and he believes the AHCA will face major changes before it’s signed into law.”

“In its current form, right now I would vote for it,” Coffman said. “I’m obviously concerned about it being changed, and what changes may happen. And I certainly do have some changes to it that I’m pushing, but if I had vote today on the form that’s there, I would support it.”

And don’t forget Coffman’s famous photo from March 7, in which he claimed to be “closely reading” the bill “to make sure it is in the best interest of CD-6 residents.”

Got back to DC and I’m closely reading #healthcare bill text to make sure it is in the best interest of #CO06 residents. pic.twitter.com/YtwRE75031

So, on March 7, Coffman claimed he read the bill. On March 11, he said he would vote for it “in its current form.” And then yesterday, just hours before holding a tele-town hall, he backpedaled to “still reviewing.” We’re awaiting reports from yesterday’s call to update with any further contradictions/”evolutions” in Coffman’s position.

But folks, this is ridiculous. The only thing that changed between when Coffman claimed to have “read the bill” and said he would vote for it and today is the CBO’s report and the overwhelming public rejection of the bill. Coffman put himself out on this limb with no help, and his original statement that he would vote for the bill “in its current form” was not equivocal.

In short, Mike Coffman is all over the map, displaying the opposite of leadership on this central issue at a time when his constituents can least afford it. The situation reveals Coffman’s great weakness as a hard-right congressman representing a closely-divided swing district–weaker now more than ever with Republicans in full control, pushing an agenda that Coffman embraces at his peril.

And it’s only going to get worse.