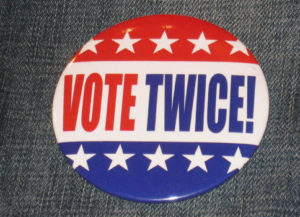 A press release moments ago from El Paso County Clerk and Recorder Chuck Broerman announces one of the rarest events in American politics, even if it’s one of the most commonly feared: a conviction for actual vote fraud by an actual voter.

The El Paso County Clerk and Recorder’s Office is pleased to announce a conviction has been secured in one of the outstanding voter fraud cases being investigated by the District Attorney’s Office. Toni Newbill pleaded guilty to voting twice under Colorado Revised Statute 1-13-710. The penalty for this crime includes probation, community service, a fine, and other court fees. Ms. Newbill attempted to cast Ralph Nanninga’s ballot in the 2016 Primary Election. Mr. Nanninga passed away in 2012.

“I’d like to thank our District Attorney Dan May and his staff for their great work on this case,” said Clerk and Recorder Chuck Broerman. “Our office takes voter fraud seriously and we’re committed to combating it in every form. We’ll continue to work with various agencies to prevent voter fraud, clean up registration lists, and prosecute those who try to abuse our democratic system.”

To say that Republican elected officials “take voter fraud seriously” is a bit of an understatement, since vote fraud claims formed an outsize component of Republican pre-election messaging in the 2016 elections. It’s true that Colorado Secretary of State Wayne Williams, a Republican himself, pushed back on Donald Trump’s unsubstantiated accusations that the “election is rigged,” but that didn’t stop the rumors from spreading within conservative media. Just as one example, former Secretary of State Scott Gessler’s unfounded claims of “tens of thousands” of illegal voters in Colorado were recycled by national conservative columnist Michelle Malkin with absolutely no regard for truthfulness.

But never mind all that, now we’ve got a real-life voter who has pled guilty to voting twice! Surely that confirms Republicans’ worst fears of rampant voter fraud, right? The answer is no, for two reasons. The first is that this conviction is evidence the system works. The attempt in this case by a Colorado voter to cast two ballots was not successful, because the voter in question, Toni Newbill, was caught.

And the second reason? Toni Newbill is a registered Republican. The election in which she attempted to cast two ballots was the 2016 primary election, in which the marquee contest was the Republican U.S. Senate primary–the same primary that saw frontrunner Jon Keyser’s campaign collapse under allegations of petition fraud, which later resulted in a felony conviction of a Keyser campaign subcontractor.

Far from proving the unsubstantiated claims from President Trump and others that vote fraud is a major problem, this one case against the backdrop of millions of votes legally and properly cast in Colorado proves that there isn’t a problem–at least no problem that merits clamping down on the system, impeding access to the franchise by thousands in order to prevent the exceedingly rare instance of actual lawbreaking.

If that blows a hole in your cherished conspiracy theories, we’re not sorry.