Get More Smarter on Wednesday (November 23) 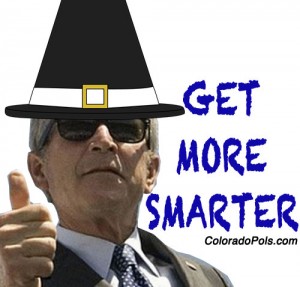 You’re less than 24 hours away from being asleep on the couch. It’s time to Get More Smarter with Colorado Pols. If you think we missed something important, please include the link in the comments below (here’s a good example). If you are more of a visual learner, check out The Get More Smarter Show.

President-elect Donald J. Trump retreated on Tuesday from some of his most extreme campaign promises, dropping his vow to jail Hillary Clinton, expressing doubt about the value of torturing terrorism suspects and pledging to have an open mind about climate change.

But in a wide-ranging, hourlong interview with reporters and editors at The New York Times — which was scheduled, canceled and then reinstated after a dispute over the ground rules — Mr. Trump was fiercely unapologetic about repeatedly flouting the traditional ethical and political conventions that have long shaped the American presidency.

Trump also made it clear that he has not forgiven Republicans who opposed his Presidential bid — here’s looking at you, Sen. Cory Gardner — while his sit-down interview with the Times also led to some significant concerns from other journalists.

► President-elect Donald Trump may have finally run out of white dudes to select as top administration officials. Trump announced on Wednesday that he will nominate South Carolina Gov. Nikki Haley as U.S. Ambassador to the United Nations.

► Former Republican Presidential candidate Ben Carson had recently ruled himself out of a potential cabinet position in a Trump administration, but Trump is now ruling Carson back in to the mix (perhaps Trump was worried about bodily harm should he not include Carson in his cabinet). Trump says he is considering Carson for HUD Secretary, which makes absolutely no sense whatsoever, as Politico explains:

Carson served as director of pediatric neurosurgery at Johns Hopkins University, but seems to have no experience that would be relevant to leading an agency focused on urban housing policy. Speaking to Cavuto, he pointed to his upbringing in Detroit, as well as his history of treating patients from urban areas.

“I know that I grew up in the inner city,” Carson said. “And have spent a lot of time there. And have dealt with a lot of patients from that area. And recognize that we cannot have a strong nation if we have weak inner cities. And we have to get beyond the promises and start really doing something.”

In short, Carson believes he is qualified to lead the federal department of Housing and Urban Development because he grew up in a city and treated patients who were also from cities. We don’t even have to attempt to make a joke here.

► Former Congressman and 2-time gubernatorial candidate Bob Beauprez says that he would really enjoy serving as Secretary of the Interior. This doesn’t seem like a good reason by itself to consider Beauprez for Interior Secretary, but Ben Carson really lowered the bar here.

► We may finally have a realistic mathematical formula to help guard against partisan gerrymandering. There’s really no way to make this story sound less wonky, but it really is a pretty big deal.

► Colorado State Rep. Joe Salazar is speaking out on behalf of protestors of The Dakota Access Pipeline in North Dakota.

► Colorado is dealing with a “dire shortage” of resources for mental health services.

► Once again, two Republicans in Boulder County are refusing to certify Boulder’s election results based on some perceived grievance that has nothing to do with the job they are asked to perform. From the Longmont Times-Call:

“It is a complete disservice to our community and to the hundreds of election judges and staff members who have invested thousands of hours planning and conducting our election to use the certification process as a vehicle to promote a personal agenda, which is what today’s action was,” Hall stated in a Tuesday afternoon announcement that the results are now official…

…Hall said that under rules from the Colorado Secretary of State’s Office, if nothing is found in the post-election audit and ballot reconciliation procedures that impacts the outcomes of the election, the results must be certified. She said there were no documented discrepancies found in the audit or reconciliation procedure that had such an impact on the outcome of the contests and questions on Boulder County voters’ 2016 general election ballots.

Hall said that “election after election, this same cohort of individuals” — the Boulder County Republican Party’s board representatives in the 2012 and 2014 elections as well as this summer’s primary election — “use the canvass board to express their political dissatisfaction with the Colorado election process and mail ballot elections.”

The two Republican dissenters — Al Kolwicz and Cathy Jarrett — refused to certify the election results because they weren’t satisfied with answers about why 1,200 ballots were not counted because of reasons varying from missing signatures to the fact that they didn’t actually arrive before 7:00 pm on Election Day. Fortunately, Boulder County doesn’t need these two assholes to certify the final election results.

► The Poudre School District (northern Colorado) will join a lawsuit against TABOR.

► Former Democratic Congressman Harold Ford, Jr. might be in line for a cabinet post in the Trump White House, potential as Transportation Secretary.

► Who was the first President to pardon a turkey during the week of Thanksgiving? (hint: It’s not Harry Truman)

► The Denver Broncos return from their BYE week with a home game against Kansas City on Sunday. The game has been moved to 6:30 pm to attract more primetime viewers.