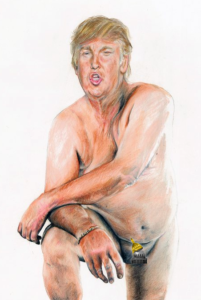 As FOX 31’s Michael Konopasek reports, to the victor go the spoils:

State officials soon will begin the lengthy process of commissioning a portrait of President-elect Donald Trump to hang in the Colorado State Capitol.

In the statehouse rotunda is a tribute to the American presidency and the 43 men who have served it.

Konopasek reports that the artist responsible for all of the Colorado Capitol rotunda presidential portraits died before completing one for President Barack Obama, and the task then fell to a gifted Colorado Springs painter named Sarah Boardman.

Boardman is certainly qualified to paint Donald Trump’s portrait, and we expect she’ll get the job–but it occurred to us there are plenty of them on the market already. And it’s possible others might want to take a (pardon us) fresh crack at it.