Numbers for tonight’s protest against President-elect Donald Trump in downtown Denver are by all accounts well into the thousands: 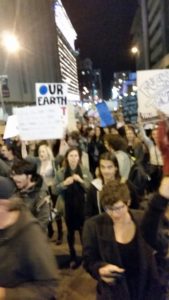 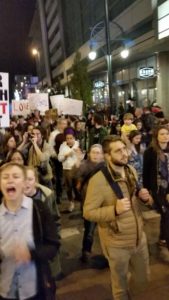 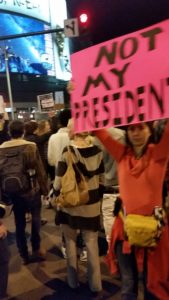 Thousands of protesters marched from the Capitol to Colfax and Broadway and then west on the 16th Street Mall. They ended up going back around to Speer Boulevard at the Convention Center.

Police worked to keep everyone safe by closing streets to traffic as the large group moved. It was described as peaceful and orderly.

These protests appear to be growing, not shrinking, as the shock over Trump’s surprise election Tuesday night converts to anger among the majority of American voters who did not vote for him. And apparently some who did, not expecting him to actually win. It’s not the first time the Electoral College and the popular vote have been in conflict, but with Trump, there is a sense of much greater offense being taken.

Are you there? Vicariously? What happens next?