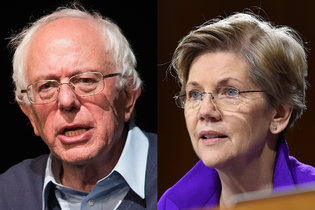 As the Washington Post reports, two Team Blue favorites are headed to town to pitch for Hillary Clinton:

The event in Denver, Sanders said in an interview, will be an opportunity “to make the case to the progressive community that it is absolutely imperative for [Republican nominee] Donald Trump to be defeated.”

But Sanders, the runner-up in the Democratic primaries, said he will arrive with a secondary goal in mind: to rally like-minded voters around implementing the Democratic platform adopted at the party’s convention in Philadelphia in July…

During a recent chat, Sanders said, he and Warren decided that they wanted to do an event together geared at the progressive community. Both have been appearing separately on behalf of Clinton. Warren was among those considered a potential Clinton running mate this year.

Sanders acknowledged that there is still work to be done shoring up support for Clinton among the party’s left wing.

Sens. Bernie Sanders and Elizabeth Warren are two of the most popular figures among the progressive Democratic base, and were each held up by Clinton’s Republican opponents as potentially divisive among Democrats at various points during the Democratic primary campaign. Since Clinton’s nomination Sanders has done his best to bring his fractious-by-nature coalition around to Clinton, and a visit from these two progressive luminaries will help Colorado’s substantial contingent of leftie voters–both Democratic and left-leaning independents–do what they need to do.

The Washington Post doesn’t mention it, but Sanders will also be speaking in favor of Amendment 69, the ColoradoCare single-payer health care initiative at events in Boulder and Fort Collins on Monday. Sanders’ Our Revolution organization endorsed the measure as one of its first actions after Sanders conceded the nomination to Clinton.

We’ll update on the VW bus tour as reports come in.