UPDATE #4: Trump is trying hard in Pueblo to save his campaign from weekend stories showing that he may not have paid income taxes for nearly two decades:

Trump: “I have legally used the tax laws to my benefit and to the benefit of my company” https://t.co/UYpqI3w42L https://t.co/bnETGBwDkN 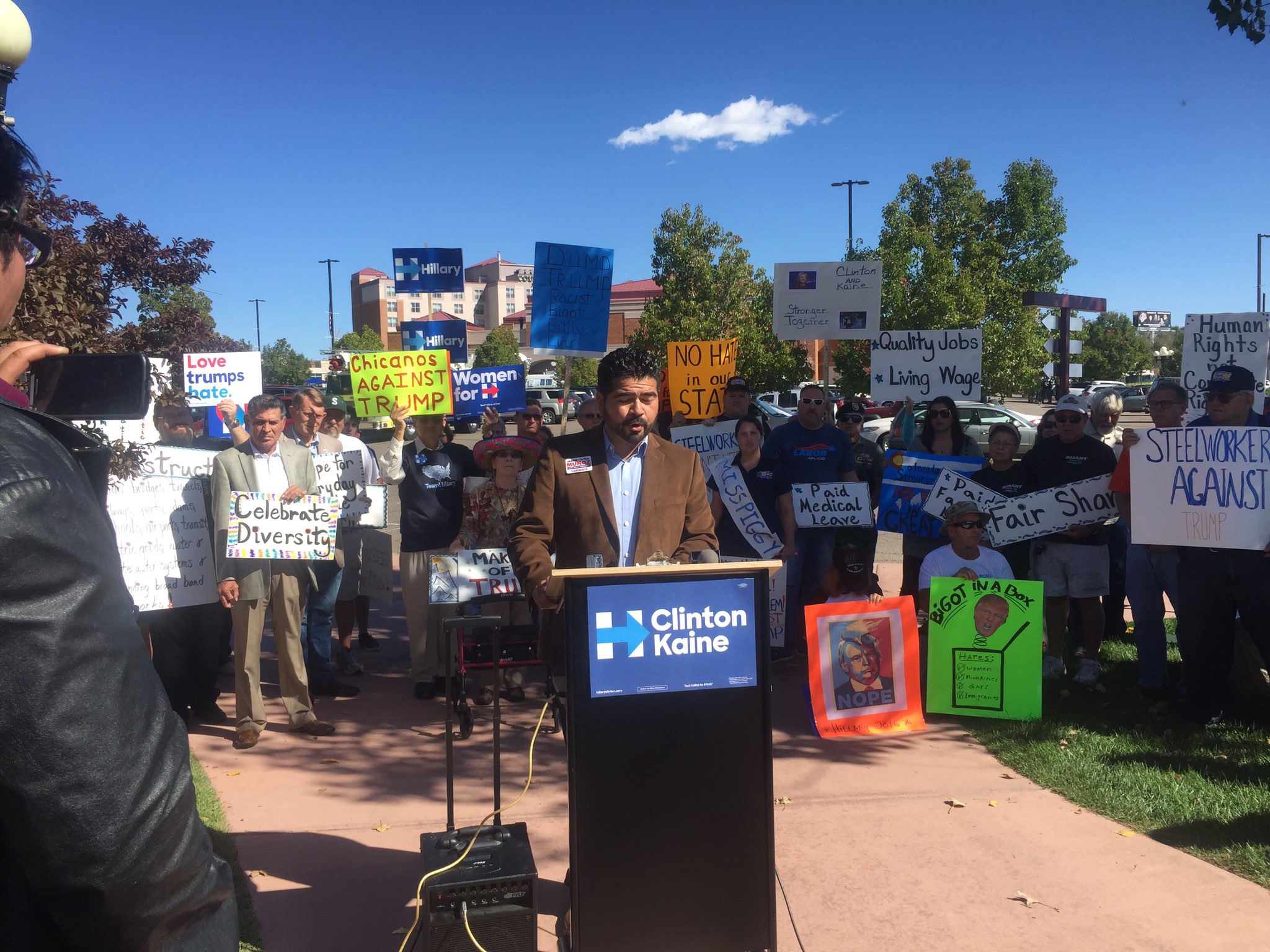 UPDATE: From the “Our Daughters Are Watching” presser at the state capitol: 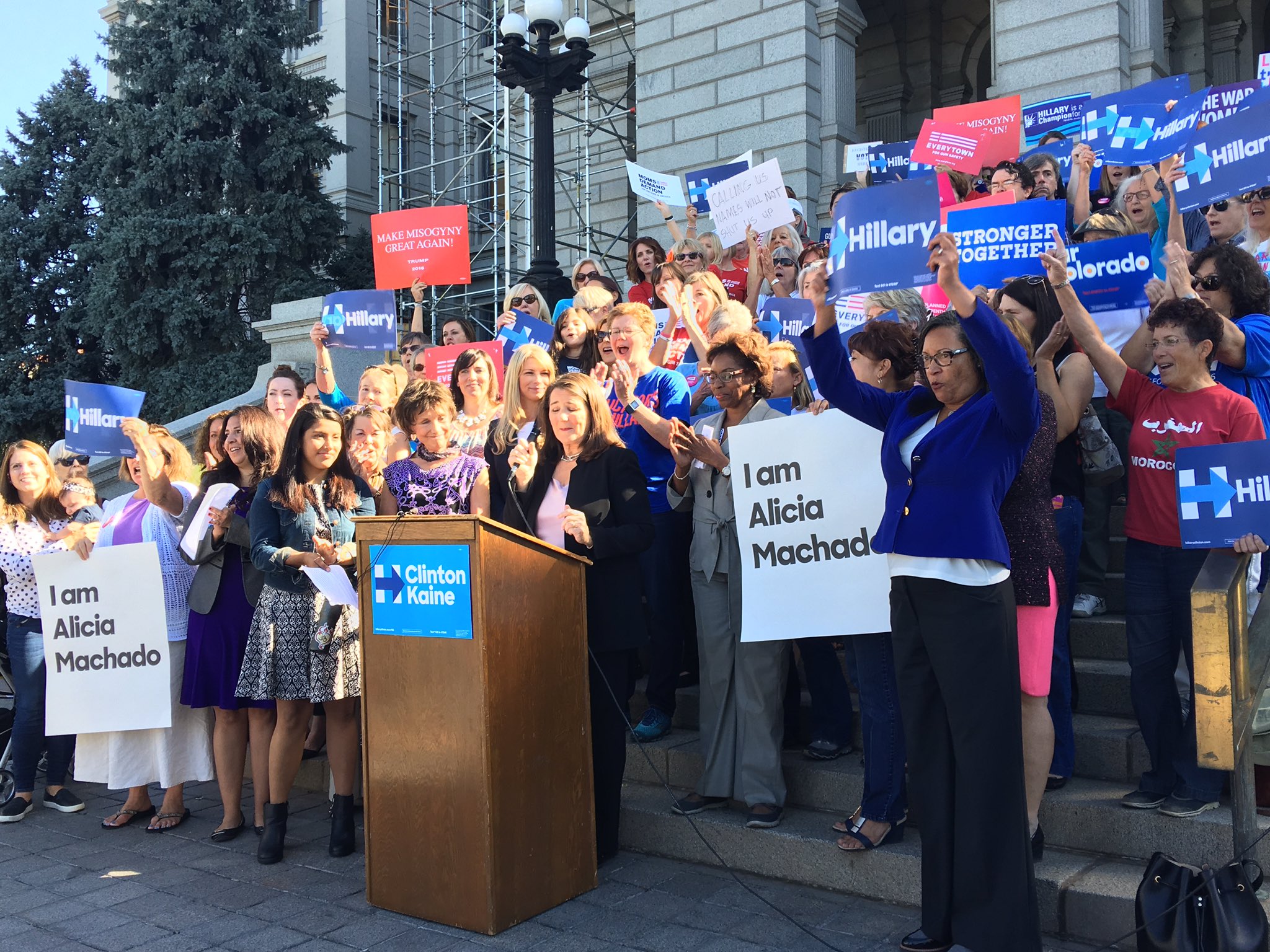 With Republican presidential nominee Donald Trump winging through Colorado today to public events in Pueblo and Loveland, opponents are making the most of Trump’s renewed downward trajectory in the race with vigorous opposition events shadowing his campaign at every step. Kicking off with a press conference at the state capitol at 10:30 this morning:

Today, Monday, October 3, Colorado Democratic and Republican women leaders will hold a press conference on the West Steps of the Capitol condemning Donald Trump for his misogynistic, insulting behavior toward women. Congresswoman Diana DeGette, former Republican Congresswoman Claudine Schneider – the first and to date only female member of Congress from Rhode Island – House Majority Leader Crisanta Duran, State Representative Rhonda Fields and 18-year-old community activist Kalina Gallardo will gather with women supporters to remind Coloradans that our daughters are watching — and this is not the kind of behavior we want them to see.

The speakers will also highlight a recent New York Times report that revealed Donald Trump lost nearly a billion dollars with his business failures and may have avoided paying any federal income taxes for nearly two decades, while millions of working Colorado families paid theirs.

Trump’s long history of publicly humiliating women for their weight and appearance includes calling women “fat pigs,” “dogs,” “slobs,” and “disgusting.” Just this week, Trump doubled down on his insults toward former Miss Universe Alicia Machado, criticizing her eating habits and her heritage.

A half hour later in Pueblo:

Today, Monday, October 3, ahead of Donald Trump’s rally in Pueblo, local lawmakers and community leaders will host a press conference outside the Pueblo Convention Center to denounce Trump’s divisive campaign and hateful rhetoric…

The speakers will explain why Trump is temperamentally unfit to hold our nation’s highest office and how he would do serious harm to our economy and national security. In contrast, they will outline Hillary Clinton’s plan to bring people together and create an economy that works for everyone, not just those at the top.

And finally, starting at 2:30PM in Loveland:

On Monday afternoon, join ProgressNow Colorado, progressive activist groups like NARAL Pro Choice Colorado, and concerned citizens from across Northern Colorado as we show the world that Loveland Trumps Hate.

Donald Trump attacks women, Mexicans, Muslims, African-Americans, the disabled, and anyone who doesn’t support his backward agenda. Trump encourages his supporters to “knock the hell” out of protestors, even offering to pay their legal fees.

But we won’t give in to his violent rhetoric. On Monday, Coloradans will stand together peacefully in Loveland to show Trump everyone else that Colorado is not a hate state.

A big day in our swingiest of swing states! We’ll update through the day with coverage as it comes in.