Hillary Gets Doctor’s Note to Run for President 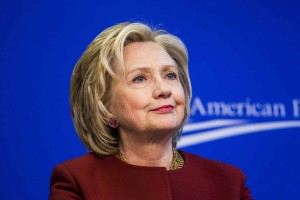 The Presidential campaign of Democrat Hillary Clinton released more medical information about the candidate this afternoon. As the Washington Post reports:

Hillary Clinton’s campaign released a letter from her doctor Wednesday describing her diagnosis and treatment for “mild, non-contagious bacterial pneumonia,” and will note that she received a CT scan confirming the illness and that she is now halfway through a regimen on the antibiotic Levaquin.

The letter, from Clinton’s doctor, Lisa Bardack, is intended to put to rest concerns about the Democratic presidential nominee’s health after the illness caused her to stumble out of a memorial service Sunday and forced her off the campaign trail for days. Clinton’s campaign said the information would update a health history released last year.

The details in the letter show that Clinton has normal-ranging vital statistics, according to several doctors who reviewed the information but have never treated her. Her blood pressure and cholesterol levels are “good” or “excellent” and place her at low risk for illness for a woman her age, the doctors said.

So, yeah…there you go. We’re having a discussion about a note from a doctor.