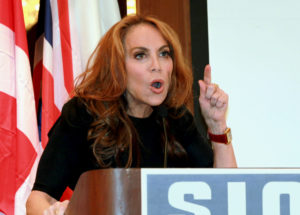 Via the Colorado Tea Party Patriots, Colorado Christian University and Tom Tancredo’s Team America PAC are joining forces to host none other than Pamela Gellar, a nationally known anti-Islamic commentator, to speak at the university on the 15th anniversary of the 9/11 terror attacks this coming Sunday:

The venue is set for Leprino Hall on the CCU campus, although the event page has the former location listed…

She is the author of Stop the Islamization of America and the co-author of The Post-American Presidency.

To reflect on the tragedy that took place at the hands of radical islamic terrorists 15 years ago and discuss the dangers we still face today and how we can combat them.

If you haven’t had the pleasure of getting to know Gellar and her particular brand of anti-Islamic rageaholism, the Southern Poverty Law Center has kept a file on her for years. Gellar is known for pushing the rhetorical envelope in ways that would even make infamous blowhard Tom Tancredo blush:

Through her website, Geller has promulgated some of the most bizarre conspiracy theories found on the extreme right, including claims that President Obama is the love child of Malcolm X, that Obama was once involved with a “crack whore,” that his birth certificate is a forgery, that his late mother posed nude for pornographic photos, and that he was a Muslim in his youth who never renounced Islam. She has described Obama as beholden to his “Islamic overlords” and said that he wants jihad to be victorious in America. In April 2011, Geller accused Obama of withholding evidence in the then-upcoming trial of accused Fort Hood mass murderer Major Nidal Malik Hasan.

Geller uses her website to publish her most revolting insults of Muslims: She posted (and later removed) a video implying that Muslims practiced bestiality with goats and a cartoon depicting the Muslim prophet Mohammad with a pig’s face (observant Muslims do not eat pork). Geller also has denied the genocide of Bosnian Muslims by Serbian forces in Srebrenica – calling it the “Srebrenica Genocide Myth,” even though the Serbian government itself issued a state apology for the massacre. She wrote, “Westerners are admitting to their role in something that didn’t happen, and digging their own graves.”

Gellar says Muslims want to “annihilate goodness, creativity, production, inventiveness, benevolence, charity, medicine, technology, and all of the gifts of the Jews,” and likened the struggle between Israel and the occupied Palestinian territories as “war between the civilized man and the savage.” And yes, all that stuff you can read above is real.

Colorado Christian University, it’s safe to say, does not have a reputation for anything you’d call tolerance–and needless to say, neither does Tom Tancredo. But much like the anti-Islamic Ditch lawmaker Geert Wilders who attended CCU’s Western Conservative Summit a few years back, Pamela Gellar takes the intolerance to a frightening new level.

Gellar’s hatred may be constitutionally protected, but it should not be welcomed.