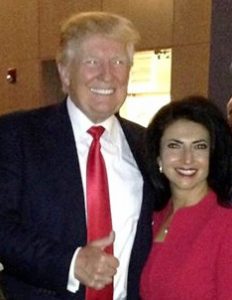 The Pueblo Chieftain’s Jon Pompia reports from this weekend’s Chicanos Against Trump rally in Pueblo–a story that steadfast Donald Trump supporter Rep. Clarice Navarro has to find at least a little troubling:

…As the challenger to incumbent Clarice Navarro, Munoz — a fifth-generation Coloradan — was critical of her support for Trump.

“My opponent is too busy flying to New York City to help Donald Trump get elected than to stay in the district to help solve the issues and problems our people face,” Munoz said. [Pols emphasis]

“I hope to encourage all of you to talk to your neighbors, talk to your friends, talk to everyone you can, and ask them to observe: who’s the better candidate, myself or my opponent?”

Ever since she emerged as one of Trump’s national go-to Latino apologistas, Rep. Clarice Navarro has done as much or more to put her House seat in play as anything her underdog opponent Jason Munoz has done. Munoz got off to a slow enough start in this race that he wasn’t really considered a serious challenger to Navarro until she raised her own profile by defending Trump on a national stage–but then outraised Navarro in the July reporting period. Navarro’s continued support for Trump, even after last week’s highly controversial address on immigration, is politically very hard to understand.

But if it proves to be her undoing on Election Day, there will be no denying that.