How Far You Have Fallen, B.J. Nikkel

Former state Rep. B.J. Nikkel, who was once considered a relatively moderate Republican politico–sufficiently so that she was considered a “sane” alternative to succeed now-Sen. Cory Gardner in Congress–was recently announced as the chair of Colorado Women for Trump. The selection of Nikkel to front for Trump in Colorado was surprising to many observers who remembered Nikkel fondly from the legislature.

But that was then. Here’s Rep. Nikkel now: 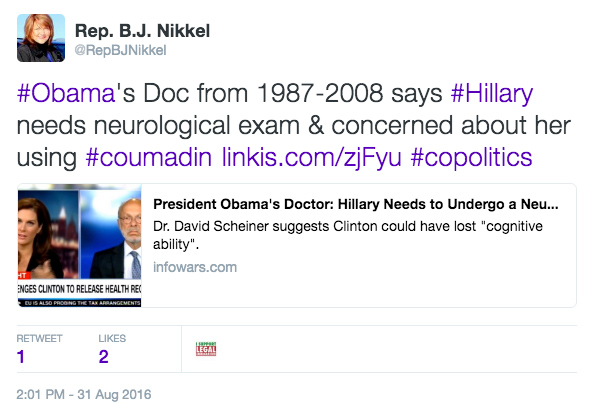 The story Rep. Nikkel is linking to in her Tweet today is a story on the website InfoWars.com, run by nationally-known conspiracy theorist Alex Jones–who among many other things believes that the September 11, 2001 terrorist attacks we an “inside job.” The story speculates that Democratic presidential candidate Hillary Clinton should have a “neurological examination” despite the fact that physicians have declared her fit to serve as President. In particular, the “difficult drug” Coumadin (a.k.a. warfarin), a blood clot preventative, is cited as a potential problem.

The trouble is that warfarin is a very widely prescribed drug that doesn’t affect cognition at all, that there is no evidence of any kind that Clinton has any unusual health problems for a woman of her age. This whole speculative business about Clinton’s health is simply another attempt to stanch Donald Trump’s hemorrhaging poll numbers.

Count us among those genuinely sorry to see Rep. Nikkel cashing in her credibility to push Trump’s desperate talking points.