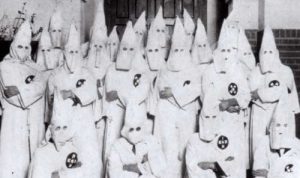 People using the term “alt-right” are likely wearing similar pajamas while they are online.

Presidential candidates Hillary Clinton and Donald Trump have both elevated the “alt-right” term in recent speeches and media interviews. In the last 24 hours, the hashtag #AltRightMeans has been trending heavily on Twitter (and there was much glee in the “alt-right” community).

If you’re not familiar with the term “alt-right,” Issie Lapowski breaks it down in an excellent piece for Wired online:

…To be clear, there is only one answer to the hashtag #AltRightMeans. It means white supremacy, researchers say, plain and simple.

“Race is at the foundation of everything to the alt-righters,” says Mark Potok, a senior fellow at the Southern Poverty Law Center, which tracks the alt-right movement as a hate group. “They have this idea that white people and white civilization is under assault by the forces of political correctness, by social justice and so on.”

The term “alt-right” is merely a rebranding of an ideology with deep, dark historic roots, says Jessie Daniels, a professor of sociology at Hunter College and author of the book Cyber Racism. In fact, you could say it’s a “dog whistle” for white supremacy. “People who are in the United States, mostly white people, are uncomfortable saying white supremacy,” Daniels says. “They’re more comfortable saying alt-right” [Pols emphasis]

If you are someone who is “uncomfortable saying white supremacy,” then you should get just as unaccustomed to using the term “alt-right.”