(Sen. Irene Aguilar is a proponent of Amendment 69 – Promoted by Colorado Pols) 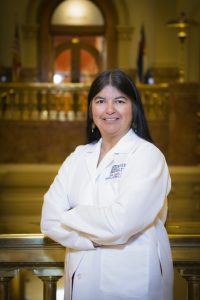 In 2007 I had the privilege of serving on the Vulnerable Populations Task Force of Colorado’s Blue Ribbon Commission on Health Care Reform (Commission).  This is when I first learned that the United States is the only developed nation in the world that does not provide access to basic health care for its entire population; yet we spend twice as much as almost every other developed nation. The Commission’s analysis also showed that by enacting a single payer financing system Colorado could afford full access to health care for every resident and decrease spending by $1.6 billion dollars in its first year.

Having worked as a Primary Care Physician at Denver Health for 18 years and witnessed firsthand the devastating effects of the inability to afford basic health care on people’s lives, I was ecstatic to learn that there was a solution that was both socially just and fiscally conservative. I was certain that the Commission would recommend this plan.

Imagine my dismay when I was told by the chair of the House Committee on Health and Human Services:  “that’s all good and well Dr. Aguilar, but this will never happen in the United States.”

Fortunately, I turned that dismay into action. I determined to find a way to save lives (and money) and help Colorado become the first state in the nation to enact a single payer health care system.

The rest is history:

It is worth noting that the 2009 House Bill, 2011 Senate Bill and 2013 Senate Joint Resolution simply created a study group to analyze how Colorado might implement a universal health care system.

In 2015 a referendum was drafted but not introduced at the request of the Speaker of the House and her chief of staff.  When this happened, a group of activists working on universal health care took action and put Amendment 69, ColoradoCare, on the ballot. With volunteers from across the state over 156,000 signatures were collected and submitted in October 2015. ColoradoCare was approved for the ballot in November 2015.

Despite this seven year history, the potential conflict with insurance coverage for abortion was first brought to my attention in January 2016.  Since 2009, ProgressNow has never reached out to work on this effort, offer feedback or raise concerns. So you can imagine my skepticism when ProgressNow writes: “The truth is nothing would make progressives in Colorado happier than taking a bold step toward single payer health care.”

As a champion of women’s rights I support Amendment 69, ColoradoCare, despite NARAL’s opposition.  Why? Approximately 350,000 people remain uninsured in Colorado. Over 700,000 people are underinsured. An estimated 535 Coloradans die each year from lack of health care. ColoradoCare will save lives.

ColoradoCare does not make abortion illegal. At issue is whether ColoradoCare can pay for abortions.  In 2014 CDPHE reports that approximately 10,000 women in Colorado received abortion care. Fifty two percent received a medication, the remainder had a procedure.  National data suggests that only 12% of women use insurance to pay for abortion. Colorado data showed that abortions in teens were reduced 42% with free access to long acting reversible contraception.  While ColoradoCare may be prevented from paying for abortion (except in cases of rape, incest and risk to the health of the mother) it will decrease unintended pregnancies, decrease abortions and save lives.

I encourage you to read the full report of the Colorado Health Institute. It is brief and well written

While I greatly respect their work, this report made two incorrect assumptions. First, they assume that Medicaid funding under a waiver would be reduced by 37%. Second, their future cost projections assume that ColoradoCare will not reduce costs. Even opponents of universal health care claim that costs would be reduced by 0.5% per year. Correcting these two errors results in a budget surplus of nearly $2 billion the first year, and fiscal sustainability through 2028. Without any premium increases!

Projections and assumptions are just guesswork. The devil is in the details and real time data. The good news is that passage of Amendment 69, ColoradoCare, leads to a detailed analysis.  An initial premium of 0.3% and 0.6% payroll is collected and an appointed board of directors fleshes out the plan.  The amendment states that in order to proceed ColoradoCare must receive the required waivers (and necessary funding) from the secretary of health and human services.  Information on the requirements and application process are available on line.

The guidelines clearly state that in order to receive a waiver Colorado’s application must show that ColoradoCare will provide coverage that is equally comprehensive, with coverage and cost sharing protections that keep care affordable, cover a comparable number of residents and not increase the Federal deficit.  An actuarial analysis and actuarial certifications to support state estimates must be submitted. A public comment period is required with a record of the public’s feedback in the application.  If ColoradoCare cannot achieve these metrics, the amendment states that it will be shut down and all remaining funds must be returned to the taxpayers.

National Medicare for All would be ideal. Having served in the legislature for six years and observed how our Congress has politicized the Affordable Care Act, I assert that this won’t happen until a state like Colorado proves it is possible.  Amendment 69, ColoradoCare, is our opportunity to, once again, make history. Fiscally conservative and socially just.