Top GOP strategist on #copolitics poll results: “The races for president and #cosen are effectively over.” @HillaryClinton @realDonaldTrump 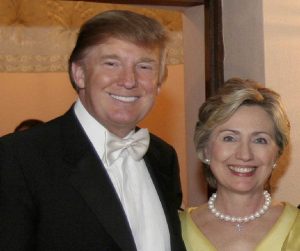 NBC News out with new head-to-head polling numbers for the presidential race in four key battleground states including our own–Colorado, Virginia, Florida, and North Carolina.

If these numbers are right, it’s fair to say that Colorado is coming off the table:

[I]n Colorado, the Democrat is ahead by a whopping 14 points, 46 percent to 32 percent. (It was an eight-point Clinton lead before the conventions, 43 percent to 35 percent.) Obama won both Colorado and Virginia in the previous two presidential elections. [Pols emphasis]

“These are supposed to be battleground states, but right now, they don’t look that way,” says Lee Miringoff, director of the Marist College Institute for Public Opinion.

Indeed, if Clinton ultimately wins all four, Trump has no realistic path to getting the 270 electoral votes needed for victory. And even if Trump is able to win in Florida and its 29 electoral votes, he has to run the table in the other battlegrounds, including in Pennsylvania.

Hillary Clinton’s 14-point lead in Colorado is the biggest shown in today’s poll, and also reflecting a big shift toward Clinton in this state following the two parties’ conventions. The other head-to-head matchup in this poll is Colorado’s U.S. Senate race between incumbent Democratic Sen. Michael Bennet and GOP challenger Darryl Glenn–in this race Bennet is already above his “win number,” crushing Glenn by 53-38%.

Here’s the full questionnaire from NBC/Marist for Colorado.

Needless to say, these poll numbers are absolutely devastating for Colorado Republicans, showing significantly greater erosion in support for Trump and down the GOP ballot than other states. These numbers corroborate internal polling from the Democratic Congressional Campaign Committee (DCCC) in Rep. Mike Coffman’s CD-6 that show Hillary up by 14 points, reaffirming the dire situation Coffman finds himself in as well.

If this poll is accurate, the biggest danger for Democrats as the tide increasingly turns against Trump and his Republican Party could be complacency. There is still plenty of time between now and Election Day for the race to tighten, and today’s unprecedented wacky political climate leaves open the possibility of…well, most anything.

In short, this poll is wonderful news for Colorado Democrats–but no reason to let up.