Let’s Talk Patriotism (Yes, There Were Flags at the DNC) 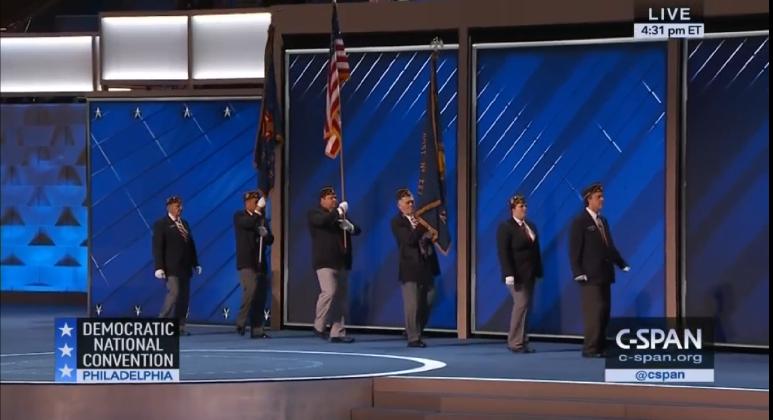 Remember the good, old days when George W. Bush was president and Republicans branded anyone – politician, reporter, or Joe Citizen – who so much as questioned the decisions and actions of the White House as “unpatriotic?”

Remember when Barack Obama was so widely criticized on the right for not wearing a flag pin on his lapel?

This notion on the far-right – that Democrats and progressives are somehow less patriotic than their conservative counterparts – is still alive and well.  The other day, I saw a meme on Facebook that said “Not one American flag at the DNC” and today I saw an article with the headline “No, Really! Right Wing Websites Claim Flags Forbidden at DNC.”

This might come as a surprise to those who actually watched the DNC (not to mention those who attended), where there was plenty of patriotism and flag waving on display. The convention opened each day with the presentation of the colors, recitation of the Pledge, and singing of the National Anthem. There were also no less than 8 flags on the stage at all times. Here’s an article from Snopes:  FALSE:  No American Flags at Democratic National Convention.

So, let’s talk about patriotism. Let’s take a look at what constitutes “patriotism” on the extreme right.

Today’s far-right Republicans show blatant disrespect for both our president and the office he holds, screaming “you lie!” during the State of the Union address.  More recently, Republican senators sent a borderline treasonous letter to Iran meant to subvert and weaken the power of the duly elected president of the very country they profess love for and allegiance to.

Today’s far-right Republicans either look the other way when our first black president is called a foreigner or help to promote this untruth.  Even Republican leaders who know this is a false narrative are too cowardly to stand up to the extremists and “birthers” because, ultimately perpetuating this lie – and stoking the racism and hatred behind it – benefits them.

When Americans faced the worst financial crisis since the Great Depression, when we desperately needed the leadership of both parties to do something about high unemployment, income inequality, and the abuses of Wall Street and the big banks, Republican leaders betrayed the American people.  Mitch McConnell said his #1 priority was to make Barack Obama a one-term president while Paul Ryan disparaged the unemployed – people who were genuinely hurting, losing their homes, unable to provide for their families – as lazy, entitled, men and women lounging in hammocks all day.

Today’s Republican leaders prey on ignorance, actively working to dumb down our public education system (it’s easy to get an uneducated population to vote the way you want them to) while, at the same time, promoting education policies that increase both racial and economic segregation and allow corporations to invade public education coffers with menaces like for-profit charter school management companies.

Today’s far-right Republicans have no problem cutting funding for preschool, hunger prevention, and after-school programs for children of poverty.

Today’s Republican leaders allow racism, bigotry, and hate to fester, turning a blind eye to racist and/or bigoted remarks made by their conservative colleagues. They praise the Supreme Court’s gutting of the Civil Rights Act.  In the meantime, Republican leaders in Texas are changing history textbooks to refer to slaves as “workers” while Bill O’Reilly is spinning his wheels to justify his comments that slaves who built the White House were “well-fed and had decent lodging.”

Today’s Republican leaders have also turned their backs on the safety of the American people, refusing to support common sense gun control measures.  Their greatest betrayal?  Refusing to act in the wake of the massacre of babies in an elementary school in Connecticut.

And while they refuse to even contemplate regulations on the 2nd Amendment, they have no problem imposing restrictions on the American peoples’ right to vote – in particular, imposing voter ID laws that are meant to disenfranchise poor communities and voters of color, people who are more likely to vote for Democrats.  It’s hard to hide your agenda when you can use a gun permit as proof of citizenship but not a student ID.  Even harder when you have politicians who come right out and state these laws are meant to help elect Republicans.

Their efforts to restrict the reproductive and health care rights of women, to deny wage equality, and essentially roll back the clock on women’s rights in general has put their misogynistic tendencies on full display.

Today’s Republican party just passed their most extreme platform ever.  One that denies basic civil rights to our LGBTQ community.

Finally, today’s far-right Republicans are too cowardly to stand against the monster of their own making. Donald Trump. A candidate who just invited a foreign power to hack into the email of his political rival, a former Secretary of State.  We could call this borderline treason or, perhaps, espionage, but it is most certainly NOT patriotism.

Trump espouses admiration for dictators like Vladimir Putin, Saddam Hussein, and Kim Jong Un. He quotes Mussolini.  He wants to violate the Geneva Convention and allow torture. He wants America to turn its back on the very countries who supported us after 9/11.  He wants more countries to have nuclear weapons and is willing to bomb women and children. He wants to violate America’s First Amendment by banning all Muslims from entering the country and creating a Muslim registry.  He wants to build a wall to keep Mexicans out and rip families of undocumented workers apart.

And still, most Republican leaders stand beside him.

When George W. Bush was president, if you had even suggested America was somehow less than great, you might have been water-boarded.  Today, most Republican leaders tacitly submit to a Neo-fascist demagogue who rarely, if ever, says anything resembling the truth.

America has a choice to make.  Will we be ruled by fear and anger as the Germans were when they carried Hitler to power on their shoulders or will we reject demagoguery and show our children that we can and will rise above all this hate and division?

The DNC had speakers of all races, religions, and backgrounds.  We heard from Anastasia Somoza, a young woman with Cerebral Palsy, from a young man who took his childhood experiences and became an advocate for At-Risk children, and from victims and survivors of 9/11.  We heard from members of our police force about their day-to-day struggles.  For me, the most inspiring speech was from a Muslim father whose son was killed by a suicide bomber in Iraq while serving this country. “Have you ever been to Arlington Cemetery?” Khizr Khan asked. “Go look at the graves of brave patriots who died defending the United States of America. You will see all faiths, genders, and ethnicities.”

What’s more patriotic than that?