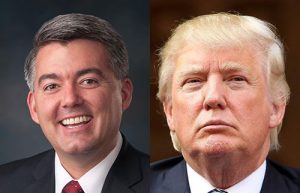 As John Frank writes today for the Denver Post, Colorado Sen. Cory Gardner (R-Yuma) continues to dance around the idea of Donald Trump as the GOP Presidential nominee:

Pressed on whether he will vote for Trump, Gardner said “I will say this — I certainly will not be voting for Hillary Clinton.” Asked whether he would just not vote, he said that is not an option. “I think a no vote is giving the victor, whoever that may be, the win without your participation. And I think everyone needs to have their day in this, win or lose.”

Gardner had previously endorsed both Marco Rubio and Ted Cruz for the Republican Presidential nomination, and while he has coyly declined to say that he would support Donald Trump specifically, Gardner is already on record promising to back the GOP nominee for President. Here’s how Gardner ended a long back-and-forth with the Wall Street Journal in March:

WSJ: Is there a reason you won’t say, “I will support Donald Trump if he’s the nominee?” Your candidate [Marco Rubio] said that tonight.

Mr. Gardner: What I know is, I will support the Republican nominee.

Gardner obviously does not want to say outright that he will back Donald Trump for President, but he has said he would back the Republican nominee for President…which happens to be Donald Trump. The rest is just rhetorical details.