The most prominent Coloradan on the official program — Darryl Glenn, the El Paso County Commissioner running against Michael Bennet for the U.S. Senate seat — received a lot less attention, even though he referred to himself as having a “nice tan.”

Glenn was scheduled to speak at 7:41 p.m. Mountain, just shy of twenty minutes before major networks ABC, CBS and NBC began their coverage. As such, the main TV venues during his time on stage were cable-news nets Fox News, MSNBC and CNN — but none of them actually broadcast his remarks. Instead, he could be seen (but not really heard) in the background of shots as pundits and personalities such as Megyn Kelly, Brian Williams, Rachel Maddow and Wolf Blitzer kibitzed.

In the hall itself, however, Glenn was a smash…

Unfortunately, there were no new votes to win “in the hall itself.”

UPDATE: The Washington Post’s Chris Cillizza was very much nonplussed by Glenn’s speech:

Darryl Glenn: A series of hackneyed one-liners (Hillary in an orange jumpsuit etc.) and blatant appeals for applause (stand up and cheer for blue lives) were bad enough. But this Glenn line put me over the edge: “Someone with a nice tan needs to say this. All lives matter.”  Oomph.

Colorado GOP U.S. Senate candidate Darryl Glenn just finished his speech at the Republican National Convention in Cleveland. We’ll be watching for news reports about the speech as they come in, because unfortunately for Glenn, it appears that none of the three cable news networks carried Glenn’s speech live: 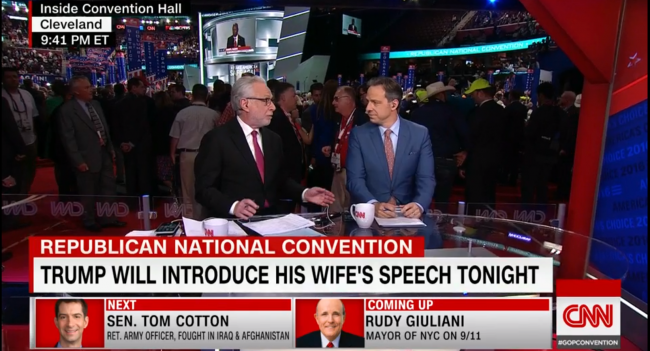 That’s as close as Darryl Glenn came to being “aired” on CNN: a shot on a projection screen in the distant background behind anchor Wolf Blitzer. We’re told that Glenn was also ignored by FOX News and MSNBC; we’re looking to confirm.

Folks, we have to say this is a real surprise. Prior to this speech Glenn had received a great deal of press for his convention speech slot, with reference to his powerful address to the Colorado Republican state assembly in April–a speech that catapulted Glenn from minor candidate to the nominee for the U.S. Senate. Glenn’s opponent, incumbent Democratic Sen. Michael Bennet, is considered the only real chance Republicans have at a pickup this year, admittedly a chance that has been in decline since Glenn won the nomination.

We have to assume that RNC showrunners had a role in selecting which candidates would receive cable news face time–or at least have a suggestion that should, in any strategic sense, include Glenn. It’s anybody’s guess why Glenn didn’t rate coverage when other less prominent figures like the Sheriff of Milwaukee County, Wisconsin, were carried live. Did the Colorado GOP delegation’s failed uprising today upset the powers that be enough to take it out on Glenn? It’s curious to say the least.

And for anyone hoping Glenn might actually have a shot against Bennet in 2016, this was a huge setback. Glenn is never going to get another shot at a national audience like this. This was Glenn’s Barack Obama moment to shine.

And he got chumped by his own party.