“Mike Pence’s extreme record in Indiana is as damaging and divisive as Donald Trump’s record” said Congressman Jared Polis. “Pence’s personal leadership of a law that legalized discrimination against LGBT Americans was not only a moral embarrassment but also lost the Indiana economy millions of dollars in business and investments. Pence embodies exactly the same kind of divisiveness and intolerance as Donald Trump, and we cannot afford to have him a heartbeat away from the Presidency.”

“From Congress to the governor’s mansion, Mike Pence is a man who has worked his entire career to limit the rights of LGBT Americans,” said Colorado State Senate Minority Leader Lucia Guzman. “We simply can’t let that form of discrimination endure by having it embodied in the Vice President’s office.”

“Mike Pence is as extreme and dangerous as Donald Trump,” said former Speaker of the Colorado House of Representatives Mark Ferrandino, the first openly gay Speaker of the House. “He doesn’t believe that families like mine are entitled to the same rights and liberties as all other Americans. That type of hate has no place in the United States – and certainly not in the Vice President’s office.”

“Once again, Donald Trump has proven he is no friend to the LGBTQ community. From his opposition to the Supreme Court’s decision to bring the freedom to marry to all Americans, to his agreement with the staunchly anti-LGBTQ Republican platform, and now his nomination of Indiana Governor Mike Pence as his Vice President, Trump continues to demonstrate his willingness to rollback the victories our community has made over the years.

“While in the Indiana legislature, Mike Pence co-sponsored an amendment to ban same-sex marriage and voted against the Employee Non-Discrimination Act, which would have made it illegal to fire someone just because of who they love. In Congress, Mike Pence voted against the repeal of the military’s ‘Don’t Ask, Don’t Tell’ policy. Finally, as governor, Pence lost the state of Indiana $60 million in revenue after signing a broad religious exemption bill into law last year.

“Multiple legislative efforts to allow individuals and businesses to claim their religion gives them permission to ignore the law — similar to the bill Governor Pence signed in 2015 — were blocked in the last two years in Colorado thanks to the Democratic majority in the State House, and a coalition of businesses, chambers of commerce, faith leaders, law enforcement, and community organizations that came together to oppose them.

“With his announcement of Mike Pence as his running mate, Donald Trump has solidified his commitment to erasing the LGBTQ community’s advancements over the past several years. Trump has given us a sneak-peek of his vision for LGBTQ people in America and it is a future that looks dangerously like the past. We have come too far to see it all undone. We are better than this. America and Colorado are better than this.”

I am pleased to announce that I have chosen Governor Mike Pence as my Vice Presidential running mate. News conference tomorrow at 11:00 A.M.

UPDATE (6:20 pm): Check out these bullet points on the front page of the Washington Post: 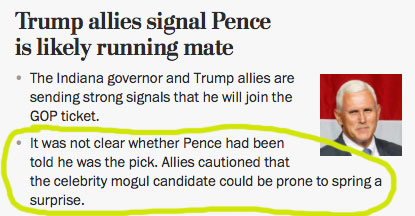 Donald Trump will postpone the announcement of his vice presidential pick due to an apparent terror attack in Nice, France. Trump was scheduled to announce and introduce his selection Friday morning in Manhattan, but he tweeted Thursday evening that he would postpone the event…

In an interview with Fox News this afternoon, Trump criticized President Obama’s handling of terrorism, then had this to say in regards to a question about Pence:

On his VP pick, the presumptive Republican nominee said, “I haven’t made my final, final decision.” [Pols emphasis]

Trump’s either lying for effect re VP or he’s really this indecisive (and doing cable TV phones instead of figuring it out). What’s worse?

It’s also worth noting that casino magnate and major Republican Party donor Sheldon Adelson is known to have been pushing for Newt Gingrich to be Trump’s running mate, so perhaps there is also some last-minute shouting taking place. —–

Gov. Mike Pence is dropping his re-election bid in Indiana to become Donald Trump’s running mate. IndyStar has confirmed that Trump plans to announce Pence as his selection for vice president, ending a weeks-long vice presidential casting call during which Trump vetted a handful of high-profile Republicans. Trump’s national campaign spokeswoman, Hope Hicks, said “a decision has not been made.” A formal announcement is scheduled for 11 a.m. Friday in Manhattan. The long-awaited decision upends the political landscape in Indiana and at least partially remakes the Trump campaign in Pence’s image.

Indiana Gov. Mike Pence is a favorite of evangelical Christians after his stout defense of that state’s “religious freedom law”–a controversy that significantly damaged Pence’s reputation outside of the Christian political right. Pence’s image is therefore fundamentally at odds with Trump’s, who has tried to keep out of personal morality wedge issues even as he runs for the nomination of the Party of Personal Morality Wedge Issues™.

There is of course logic in selecting Pence just before next week’s Republican National Convention, as Pence may have enough stature among the party faithful to forestall an expected “Dump Trump” coup attempt. Beyond that moment, Pence is a bizarre muddling of Trump’s message–a sacrifice to the Republican rank-and-file that jeopardizes any support he might get from socially tolerant fiscal conservatives.

At this point, we think most of Trump’s goals…are short term.