(Why not? — Promoted by Colorado Pols) 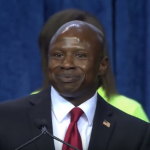 Left out of much of the coverage of Darryl Glenn’s victory Tuesday is the fact that he’s a full-throttle supporter of a personhood abortion ban, according to Colorado Right to Life.

Glenn’s support of personhood apparently stems from his deep religious beliefs, which he spotlights frequently on the campaign trail.

For example, as I reference in a Rewire post today on the implications of Glenn’s personhood stance, Glenn discussed the importance of religion to him and his campaign in an April 11 interview on Colorado Springs radio about his speech at the Republican state convention:

RANDALL:  You were the one who brought it all.  And yours – if they were going to listen to one speech, including Ted Cruz – no offense—yours was the one to listen to.  There’s a lot of passion in you.  Where does the passion come from?

GLENN:Well, that wasn’t me.  That was the Holy Spirit coming through, just speaking the truth.

GLENN:  Absolutely.  This campaign has always been about honoring and serving God and stepping up and doing the right thing.

RANDALL:  Then I got to tell you what:  It’s a powerful thing.  I’ve always been baffled at how the Holy Spirit works. […]  but if you are the conduit, and that is what is coming out of you, then it is a powerful, powerful thing!

Based on this, it would be interesting to know what Glenn thinks of the separation between church and state, but it’s clear that he takes his religious beliefs seriously.