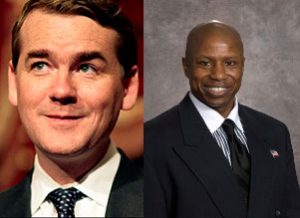 As the Washington Post reports this morning, Republicans are feeling glum about the chances of GOP nominee Darryl Glenn (R-Colorado Springs) knocking off incumbent Sen. Michael Bennet (D-Denver) in November. In fact, the Post goes so far as to say that “Senate Republicans are basically writing off Colorado”:

Republicans can’t afford any mistakes, and Tuesday’s GOP primary in Colorado looks like it qualifies. In that swing state, Sen. Michael Bennet is one of Senate Democrats’ most vulnerable incumbents — or at least he was supposed to be. Republicans stumbled to find a credible challenger, and a messy, chaotic primary ended Tuesday with the one candidate Senate Republican operatives really, really didn’t want to win: El Paso County Commissioner Darryl Glenn. [Pols emphasis]

…Glenn turned a shoestring primary campaign into a victory. The problem is that he’ll have to repeat that all over again to have a chance in the general election. It’s a long shot — so much so that his own party doesn’t really see a path to victory.

In the overarching race for control of the Senate, Senate Republicans just took a big hit.

Republicans have already reserved some $40 million of air time for TV ads in key states; tellingly, Colorado is not one of them.