With a few days having passed since last weekend’s horrific domestic terror attack on a gay nightclub in Orlando, Florida, here’s a roundup of some of the more distasteful reactions we’ve seen from Colorado Republican state senators and staff on social media. Hopefully we’re not too close to the event now for this to make you as angry as it might have a few days ago.

Sen. Randy Baumgardner of Hot Sulphur Springs, who has benefited in his career more than once from rank anti-gay smear campaigns, posted this item only hours after the killings: 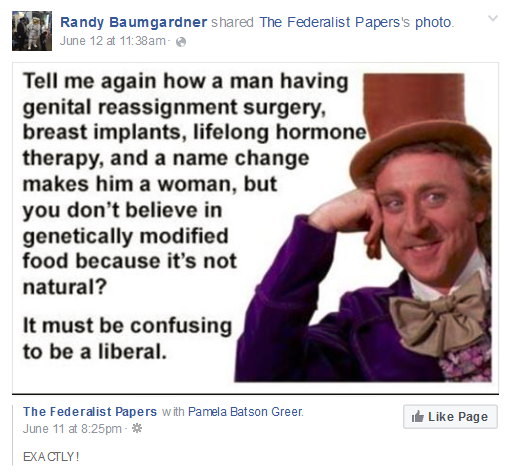 Later in the day, Sen. Baumgardner took to Twitter to declare his outrage at ISIS terrorists and the American leftists who would “use” the attack to move forward a gun control agenda: 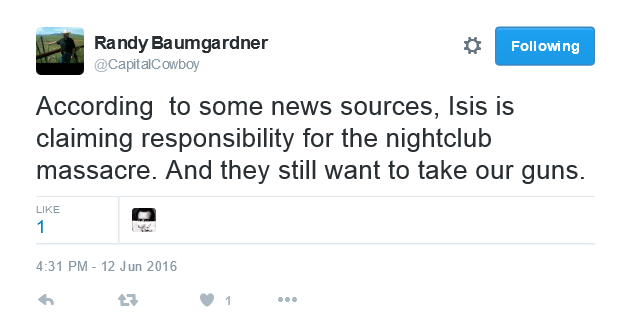 As we know now, the Orlando shooter was a natural-born U.S. citizen who by all accounts “self-radicalized.” In addition, news reports suggest much more complex psychological motives for the shooter, including possible repressed self-hatred directed at gay people. Given that the shooter was a U.S. citizen with a firearms license and no prohibition on gun ownership, the conversation must become one about easy access to semi-automatic high powered weapons–even if Republicans and their gun lobby benefactors really don’t want that. 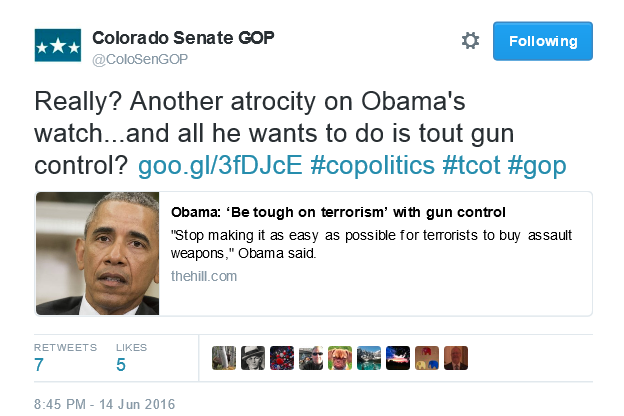 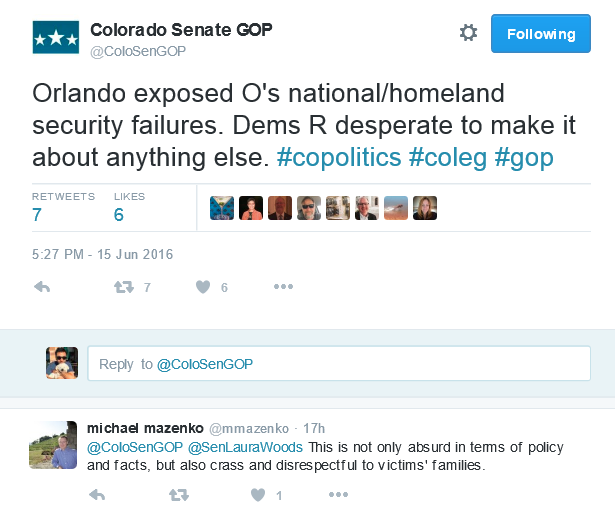 Obviously, if the shooter was an American citizen, and the guns were legally purchased with background checks, it’s absurd to suggest that the attack was the result of any “failure” by President Barack Obama on “national security.” After all, Republicans steadfastly oppose checking the terror watch list during gun purchase background checks, and the shooter wasn’t on the list regardless. Due-diligence investigations of the shooter by the FBI related to other suspects years prior didn’t turn up anything to act on.

But don’t tell any of that to the most vulnerable Republican in the Senate, Laura “Waters” Woods. No matter what the middle-class surburbanites in Woods’ district may think about what happened in Orlando, for Woods the conversation begins and ends with Obama and foreign Muslims who want to kill us. No acknowledgement of where the shooter was born, how he obtained the weapons he used, or what appear to be personal motives concealed by the jihadi rhetoric this natural-born citizen appropriated.

It’s true that these are not the only Republicans making inexcusable asses of themselves over the Orlando LGBT terror attack. They’re just the ones we have to write about in Colorado politics. It’s a sad story of missing the point, perhaps deliberately, playing out from coast to coast.