UPDATE #3: Nelson for Colorado responds directly in the comments below….

UPDATE #2: Rep. Rhonda Fields, who holds the HD-42 seat Eric Nelson is running for, calls for him to withdraw from the race and resign from the Aurora school board:

“Impersonating a military officer, violence against women, bigamy, dodging child support payments? This pattern of behavior is deeply disturbing to me, it’s unacceptable in a leader, it goes against everything Democrats stand for, and I believe the people of Aurora and the state of Colorado deserve better. Therefore, I call on Eric Nelson to immediately withdraw his candidacy for state representative and to resign his seat on the school board.”

UPDATE: The “you know what” is hitting the proverbial fan in Aurora:

While you were tucked all snug in your bed last evening, Ernest Luning of the Colorado Statesman was breaking a story that is so bizarre you’d be forgiven if you thought it was a fairy tale. Eric Nelson, a member of the Aurora School Board and a Democratic candidate for House District 42 (Aurora), is one hell of a con man: 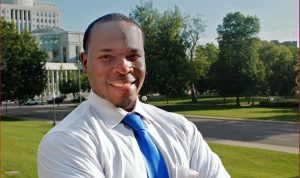 A member of the Aurora Public School Board and Democratic state House candidate who describes his occupation as “Life Visionary” appears to have taken his knack for self-invention to extreme heights, an investigation by The Colorado Statesman has revealed. [Pols emphasis]Eric Durane Nelson, 38, one of two Aurora Democrats in a primary for the House District 42 seat, was rebuked by the state Division of Insurance for lying about his criminal background — including domestic violence arrests spanning a decade — and was denied an application for another insurance license for “failure to demonstrate that you are competent, trustworthy and of good moral character.”

At another time, Nelson was married to two women at the same time, according to court documents.

Based on information uncovered by The Statesman, the organization that works to elect House Democrats on Monday said it is calling on Nelson to withdraw from the race and, in an unprecedented move, will endorse his primary opponent, Dominique Jackson. [Pols emphasis]

The HD 42 seat is currently represented by state Rep. Rhonda Fields, D-Aurora, who is term-limited and in a primary of her own against state Rep. Su Ryden, D-Aurora, for an open state Senate seat. Republican Mike Donald is running unopposed for the GOP nomination for the heavily Democratic House seat.

You really have to read the entire story yourself — it is an incredible tale of a career criminal and con man who talked his way into a position of being the top-line candidate on the June 28th Primary ballot. Just look at some of these examples:

Although the specifics of his claims have changed over the years, Nelson says he’s earned numerous advanced degrees — as many as seven have shown up on various resumés — including a master’s degree from a university that says he was never enrolled there.

Asked by The Statesman early Monday afternoon why the Northeastern University registrar’s office in Boston said the school had no record of him, Nelson promised to email copies of his diploma and academic records but six hours later hadn’t sent anything.

In earlier versions of his resume, Nelson describes himself as an Air Force veteran and has also been fond of posting photographs of himself on social media in a captain’s uniform, despite having been an active duty member of the service for just eight weeks, according to Department of Defense documents.

The story is not without its victims, unfortunately. Luning writes that Nelson recently talked his way into a job leading a nonprofit called Angel Eyes, claiming to have a Master of Social Work degree. By the time other employees and volunteers realized the lie, he had nearly robbed them blind.

“We were thinking, this couldn’t be happening because he was so slick. But it just snowballed,” said a woman who works at Angel Eyes, a Cherry Creek-based organization that comes to the aid of parents who have lost an infant.

From a political perspective, House Democrats absolutely did the right thing by immediately calling on Nelson to drop out of the race, as well as endorsing a Primary opponent for the first time in the history of the House Majority Project. It is a pretty stark difference between Democrats and Republicans in Colorado in recent years, particularly when it comes to troublesome individual candidates or campaigns.

Republicans often spend days and weeks wringing their hands when bad eggs emerge and legislators make terrible comments without rebuke; they only seem to act when something is so egregious that virtually no member of the public at-large would disagree. The Nelson story is going to leave a lot of confused and angry Democrats — particularly those who endorsed his House candidacy — but this is a band-aid that needs to be pulled quickly.