UPDATE #3: From One Colorado, the state’s biggest LGBT advocacy group:

Dave Montez, Executive Director of One Colorado, the state’s leading advocacy organization for lesbian, gay, bisexual, transgender, and queer Coloradans and their families, issued the following statement in response to the shooting last night at an Orlando gay nightclub that killed 50 and injured more than 50 others.

“We are shocked and devastated by the horrible shooting that occurred in Orlando last night and our hearts are with the victims and families who have been impacted by this horrific act of violence targeting the lesbian, gay, bisexual, transgender, and queer community in Orlando.”

“June commemorates Pride month and gay clubs hold a significant place in LGBTQ history. They were often the only safe gathering place for LGBTQ people and this horrific act strikes directly at our sense of safety. We will all continue to work to address the hatred that causes these senseless acts of violence in hopes that something like this never happens again.”

And from Colorado Speaker of the House Dickey Lee Hullinghorst:

“My heart goes out to the victims of this attack, to their families, and to the greater LGBT community. This morning’s attack is a reminder to us all that gun violence in America is a plague that afflicts every state, every city and every community. That this was a targeted and hateful terror attack against the LGBT community only compounds our hurt today. We must all come together, as a nation, to do more to stop the mass gun violence that plagues this country, and stand together against hate and extremism however it manifests itself.” 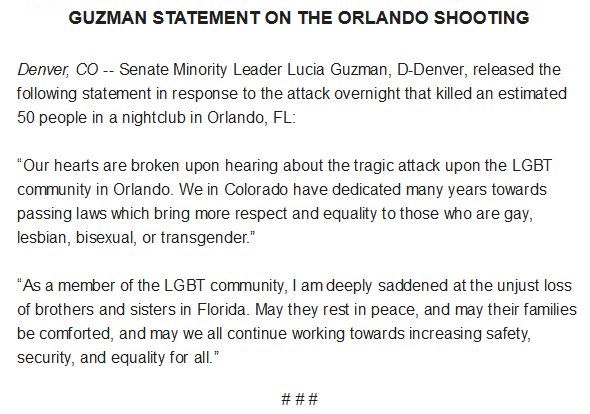 UPDATE: The father of the alleged shooter in Orlando says that he believes the attack was motivated by his son’s anger at recently witnessing open affection from two gay men. According to NBC News, “This had nothing to do with religion,” said Mir Seddique. 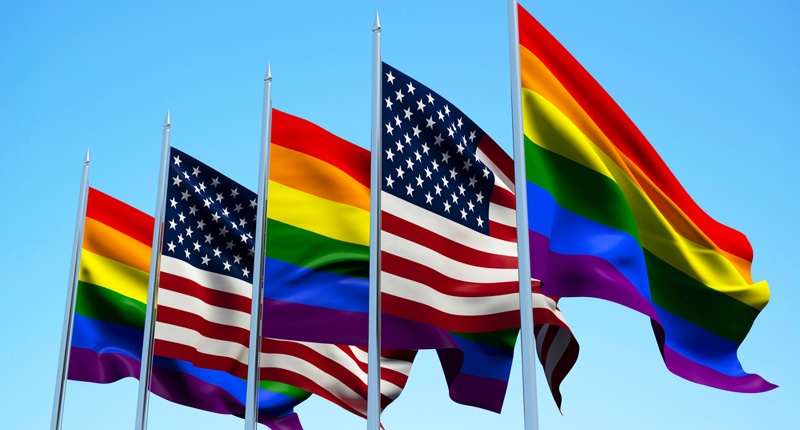 What a horrible thing to wake up to. CNN:

At least 53 more people were injured, Mina said. Police have shot and killed the gunman, he told reporters…

Orlando authorities said they consider the violence an act of domestic terror. The FBI is involved. While investigators are exploring all angles, they “have suggestions the individual has leanings towards (Islamic terrorism), but right now we can’t say definitely,” said Ron Hopper, assistant special agent in charge of the FBI’s Orlando bureau.

Authorities are also looking into the possibility the attack was a hate crime, a law enforcement source told CNN.

We’re not yet in a position to evaluate the full implications of this terrible news. But we’ll update as we learn more about what happened last night, and our thoughts are with these victims–and all victims of both terrorism and hatred across the world.