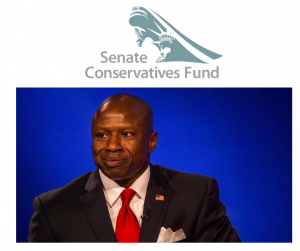 Every once in a while a truly exceptional candidate comes along that, if elected, will be a real game changer for the country.

Darryl Glenn, who is running for the U.S. Senate in Colorado, is one of those candidates, and it’s why we’re endorsing him today.

Darryl Glenn is an El Paso County commissioner, a former Air Force officer, and the only reliable conservative in the Colorado Senate race.

When he announced his campaign back in January, nobody thought he had a chance. But in April, he shocked the Colorado political world by winning 70 percent of the vote at the GOP state convention.

Darryl’s principled and passionate message helped him win over the delegates who were looking for a conservative outsider to shake things up.

Colorado Democrats taking note of this endorsement for a good reason, and firing a volley at Glenn for effect:

Today, Darryl Glenn received the endorsement from the Senate Conservatives Fund (SCF), a group responsible for helping elect some of the Senate’s most conservative and out-of-touch Senators, including Sen. Ted Cruz and Sen. Mike Lee. SCF is the same far right group that helped Ken Buck defeat NRSC-backed Jane Norton in the 2010 Republican Senate primary…

“Darryl Glenn is a climate change denier who has called Donald Trump a patriot, and wants to defund Planned Parenthood and effectively outlaw a woman’s right to choose,” said Chris Meagher, spokesman for the Colorado Democratic Party. “Now he’s won the financial backing from the same national right wing interest group that brought us Senators Ted Cruz and Mike Lee, another sign that he is out-of-touch with Colorado and the wrong choice for U.S. Senate.”

With no clear frontrunner following the implosion of handpicked National Republican Senatorial Committee (NRSC) candidate Jon Keyser, there is a growing opportunity for Glenn to position himself as the grassroots favorite in the race–while better-funded opponents Robert Blaha and Jack Graham slug it out with each other. Glenn’s fiery speech at the Colorado GOP state assembly that catapulted him into the primary is really one of the only bright spots for Colorado Republicans today in a sea of political uncertainty and calamity. Blaha’s bitter attack on Graham over Graham’s record at Colorado State University, without a counterbalance to motivate support for Blaha personally, could play right into Glenn’s hands…particularly if he has the money to make himself known to more Republican voters.

And yes, that’s right–SCF helped Ken Buck take out Jane Norton over the kingmakers’ wishes. So there’s that.