So as not to bury the lede, we’ll get right to the point: the petition gatherer at the center of Jon Keyser’s forgery crisis was convicted of attempted forgery in New York State. 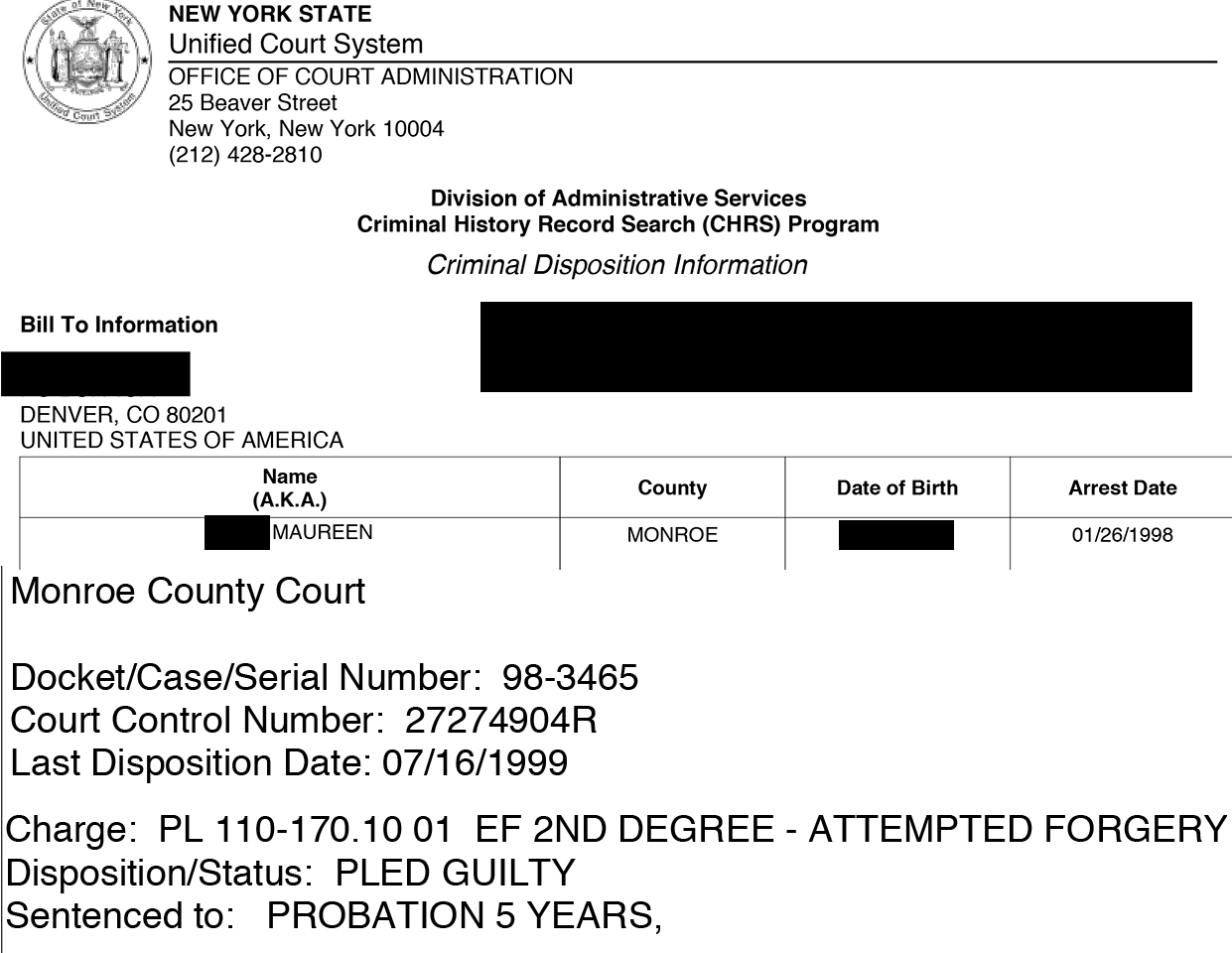 Keyser petition gatherer “Maureen” also has a significant record of other criminal convictions on her record that Zelinger briefly described in tonight’s teaser segment. Needless to say, this clearly indicates that no meaningful background check of any kind was conducted on Keyser’s petition gatherers before they were sent into the neighborhoods of Colorado to knock on unsuspecting Republican doors. Or in Maureen’s case, not.

Unless, of course, forgery skills were considered a job skill.

In other news from Denver7, Zelinger’s crew has set up a searchable index of not just Keyser’s petition signers, but those of all four Republican U.S. Senate candidates who petitioned on to the ballot:

If you find your name on a petition and you did not sign that petition, please contact Denver7 at politics@thedenverchannel.com and let us know.

Keyser’s campaign as of this writing continues to hide from reporters, which is increasingly becoming a self-contained public relations disaster:

Prior to Zelinger’s report yesterday, Keyser had been scheduled to attend two primary-race events tomorrow. As of now his appearance is a big question mark–but either way, no-show or not, will be a story all its own now.

Keyser, a Republican, cleared the threshold by just 20 signatures in Congressional District 1 — where the 10 signatures in question were found — and the liberal group ProgressNow Colorado wants the authorities to take a closer look.

“The extent of the petition fraud uncovered in Jon Keyser’s campaign is shocking and exceeds our worst fears,” said Alan Franklin, the group’s political director.

One obstacle for ProgressNow, however, is finding a legal pathway to file a complaint against the Keyser campaign. Because ProgressNow can’t easily claim to be a victim in a Republican primary, it likely needs a proxy, such as another GOP candidate, a registered Republican or one of the 10 voters whose signatures were used.

Look, the technicals of who might have standing are worth noting, but the point here is that Jon Keyser is very likely qualified for the 2016 GOP U.S. Senate primary ballot as the direct result of fraudulent forged signatures. Full stop. No “buts.”

And that can’t be allowed to stand. Right? It’s just not an acceptable situation in, you know, America. Right? We do not live in a Banana Republic, and that means we are obliged to find a means within the law to rectify election fraud when it occurs.

Zelinger reports that almost 500 validated signatures were turned in by “Maureen,” with a large number but as-yet unknown number of those in CD1 where the margin was only 20 signatures to begin with. Based on the number of fraudulent signatures uncovered so far, it is almost certain that there are enough left to find to bring Keyser under sufficiency–Zelinger said he stopped at 10 only because he had to get the story to air. If that’s not enough, it’s possible that all of “Maureen’s” hundreds of validated signatures could be thrown out because they were attested to fraudulently.

We recognize that sometimes shocking events in politics can cause radical whiplashy changes. It can be very hard to accept that a favored candidate is in the race one day and completely destroyed the next. But that’s where Keyser is today as this petition fraud scandal escalates, pending a hard collective realization by everyone who was banking their hope on him for a win against Democratic incumbent Sen. Michael Bennet. Keyser’s campaign is more than over, it’s a cautionary tale now.

But that’s going to take some time to sink in.