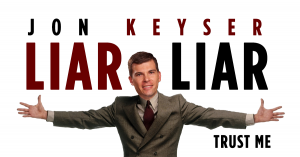 If you haven’t been following one of the biggest political stories in recent Colorado history, click here to get caught up. We’re talking, of course, about allegations of ballot fraud and forgery connected to the Jon Keyser for Senate campaign revealed in an an absolutely devastating series of reports from Marshall Zelinger of Denver7.

There are plenty of questions swirling around Keyser today, but here’s the important one: Whether or not his name remains on the GOP Primary ballot for U.S. Senate, does Jon Keyser have any chance at winning this election?

There are 26 days until ballots start going out in the mail to Primary voters, and the only thing an average voter would know about Keyser from the last month of media coverage is that he has been on and off the ballot and faces serious accusations of fraud and forgery. Keyser’s fundraising in the first quarter of 2016 was awful, and unless he somehow received a major infusion of cash, it is likely that the campaign is paying bills on a check-by-check basis.

On top of all that, Keyser’s campaign has spent most of the last month making legal arguments about ballot access instead of talking to voters. Republican opponents Darryl Glenn and Jack Graham have spent the last month hitting the stump and raising money, and even Robert Blaha now has a big head start on Keyser entering the final stretch of the campaign.

We’re sure you have more questions, and so do we. Below, we also provide some answers:

Q: Will Keyser’s name remain on the June 28th Primary ballot and/or will any votes he receives be counted?

A: This is the logical next question, but for a lot of reasons it might be the least relevant. The Secretary of State (SOS) has a court order for Keyser’s name to be on the ballot after a lawsuit filed by his campaign last month somehow convinced a Denver judge to ignore an initial ruling from the SOS that Keyser did not qualify. Ballots for overseas voters are supposed to be mailed out by Friday, May 13, so there isn’t a lot of time for a decision to be made to remove Keyser from the ballot…but that’s not really Keyser’s biggest problem right now.

Fellow Republican Ryan Frazier made a deal with a Denver judge last week that his name would remain on the ballot while he appeals a ruling that he did not qualify so that county clerks could go ahead and start preparing the documents for the June 28th Primary. As part of that deal, Frazier must withdraw from the race if his appeal is unsuccessful; in that scenario, any votes Frazier ultimately receives in the Primary would not be counted. This is perhaps the most likely outcome to another challenge of Keyser’s petitions, as questions about fraud or forgery are under the jurisdiction of the District Attorney. Keyser’s name will likely remain on the ballot given the time crunch for county clerks, but that doesn’t mean he can’t later be ruled ineligible at a later point. For now, Keyser will continue his campaign for Senate under a cloud of suspicion that could become a thunderstorm at any moment. Too bad he can’t afford an umbrella.

Oh, and in the meantime, Keyser opponents will tell voters that “Keyser made the ballot by fraud.” Keyser is trying to raise his profile among Primary voters at the same time he’ll be fighting this narrative of a campaign that appears to be trying to skirt the rules. That’s not good.

Q: How is Keyser going to raise the money he needs to have even a chance of winning the June 28th Primary?

A: Good rhetorical question. Would you send Keyser a big donation if you had any inkling whatsoever of the allegations of fraud and forgery surrounding his campaign? Big donors write big checks to candidates that look like they can win; Keyser can’t even say for sure that his votes will be counted. Remember: Keyser wasn’t having much luck raising money before any of this negative information came to light. It’s not going to get easier now.

Q: Fine, but how much are voters really paying attention to any of this right now?

A: We’re always surprised when we hear otherwise smart political people asking this question, as though news is only relevant during the exact time it is being reported. Bad news like this doesn’t just go away at the next commercial break. There will be more stories about Keyser’s fraudulent petitions, and the stories that already exist will be widely disseminated. And if you don’t think Keyser’s Primary opponents are going to talk about this on the stump and in media interviews, you’re living on a different political planet.

What really makes these stories a campaign killer for Keyser is how easily they can be reused in attack ads. Just consider this exchange between Zelinger and Pamela Niemczyk, one of the people whose name was apparently forged on Keyser’s petitions:

“Do you know who Jon Keyser is?” said Zelinger.

“Do you want to know who he is?” asked Zelinger.

“I do. Probably not for the reasons Jon Keyser wants me to know who he is. I don’t know how anyone could trust you after this,” said Niemczyk. [Pols emphasis]

This is an average everyday Republican voter questioning the integrity of Jon Keyser…and there are many more in Zelinger’s reporting. You don’t need to be J.J. Abrams to make a hit video with this kind of material.