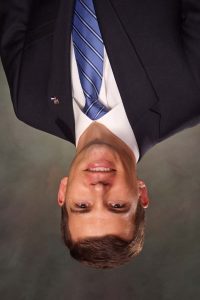 Jon Keyser’s fundraising has been a bit…upside down.

On Monday we wrote about the “Winners and Losers” from the Q1 fundraising period in Colorado’s two marquee federal races: U.S. Senate and CO-6. The numbers we compared were those that were made publicly available to media outlets, but as we’ve said before, those numbers often look much different when you get a chance to see the details of the fundraising report. Sometimes, they tell a completely different story altogether.

Take the case of U.S. Senate candidate Jon Keyser, for example. Last Friday, Keyser’s campaign claimed to have raised “about” $300,000 with “about” $200,000 cash-on-hand (COH),  thanks to a $100,000 personal loan from the candidate himself. One week after Keyser’s fundraising “announcement,” a couple of things jumped out at us when we saw the details of the actual Q1 FEC report filed by the Keyser campaign (look it up at FEC.gov).

Keyser’s campaign didn’t invent the art of financial, uh, stretching, but they do it well. A quick look at Keyser’s finance reports reveal all of the little half-truths that built one sorta-truth so that they could claim to have raised more than $300,000 in Q1 (and avoid the bad press that would come with a figure only in the $200’s).

The oddest of these maneuvers appears at the end of the cycle, on March 31. Keyser’s report appears to show both a $5,062.71 “in-kind” donation to his campaign, as well as a $5,062.17 expenditure for reimbursement of funds to…Jon Keyser. If this report is correct, Keyser’s campaign surpassed $300k only with his last-minute donation, which is technically (probably) accurate. Overall, his campaign basically took a net loss of $5,062.71 on the transaction, which leads us to the cash-on-hand problem.

It is standard practice for campaigns to avoid making big expenditures until one or two days after the end of the fundraising quarter so as to inflate the numbers on their official quarterly report. Keyser’s campaign isn’t doing anything new here; but when you have a weak fundraising quarter, you have to play around with the numbers to make it look better. Keyser reported $200,000 COH at the end of March 31…but on April 1 (or soon thereafter) his campaign had several other expenses coming due. 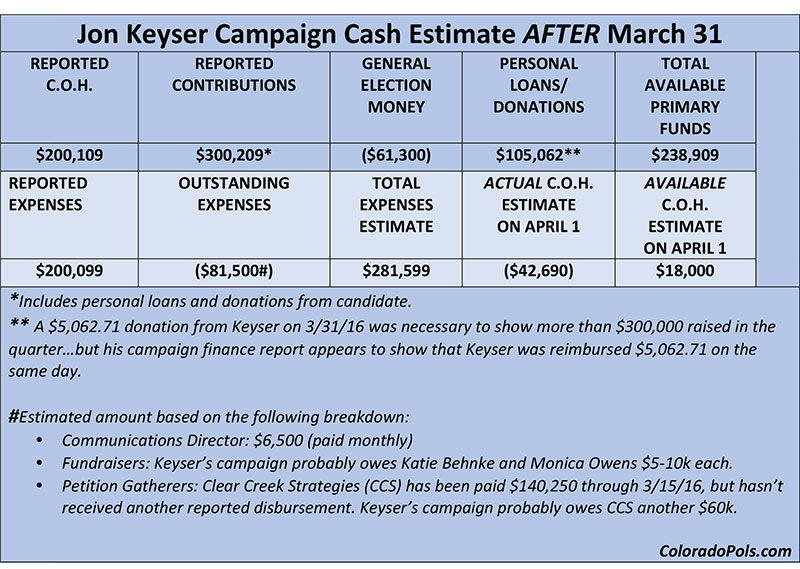 As you can see from the chart above, Keyser’s bank account was getting pretty thin at the end of the fundraising period. Of his $300,000 in reported contributions, $61,300 are from donors who wrote a maxed-out check; in other words, this money should be “set aside” for the General Election and is technically not available for use in a Primary (a maxed-out donor is essentially donating to two campaigns — the Primary and the General campaigns). That leaves Keyser with about $238,909 in available Primary campaign money.

Of course, Keyser would likely still be raising money during this period, so the balance probably swung higher, but that’s not really the point here. Most truly competitive Senate campaigns should have close to $1 million stored away by now. With eight weeks to go until ballots are mailed to Primary voters, Keyser’s campaign has so little money that it is likely struggling just to keep the lights on.