@CathyHolladay1 The protest has been moved to the state capitol building. https://t.co/i4Np5WJH4j 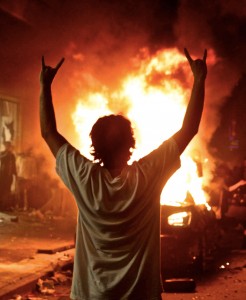 As the low-information backlash against the Colorado Republican Party by supporters of GOP presidential candidate Donald Trump rages on, a protest action is in the offing this Friday at 3:00PM outside the state party’s headquarters in Greenwood Village:

The Colorado Republican Party shamefully silenced its voters this election season. We demand that Colorado give the power to vote in the Presidential Primary to the voters. We will exercise our right to assemble and peacefully protest the corruption of the Colorado GOP and disenfranchisement that we the voters have suffered.

Show the Colorado GOP how many people they have angered by silencing our voice.
Show the GOP a preview of what is to come if we come to a contested convention.
Start the process for establishing a primary vote in Colorado.

But according to local GOP radio host Jimmy Sengenberger, a pro-party counter-protest will kick off at the same time and place:

Grassroots activists will gather at 3 p.m. on Friday, April 15, to counter a protest being organized by “Colorado Votes Matter” and instant-celebrity Larry Wayne Lindsey. The rally is being planned in the wake of threats and public intimidation made against officials and staff of the Colorado State Republican Party.

“You can disagree with the caucus process and the decision not to have a binding straw poll. You can advocate for a primary in Colorado. Reasonable minds may differ on these subjects. But lying, deceiving, smearing, and threatening lives is totally unacceptable,” said organizer Jimmy Sengenberger, 25, a longtime conservative activist and a Denver radio personality. “We stand firmly with Chairman Steve House and the staff at the State Party.”

So, the most likely outcomes Friday are as follows: Trump supporters swamp the anti-Trump “counter-protest,” the counter-protest swamps the pro-Trump protest, or nobody gives up their Friday afternoon to give a crap either way. Given the level of vitriol being pumped out over every available medium by Trump’s camp over the results in Colorado, and the equal resolve with which local Republicans are standing up to defend their severely compromised presidential caucus process this year…well, there’s certainly a scenario in which this gets very nasty indeed.

Out of an abundance of caution, we intend to keep away from visible range of either crowd.