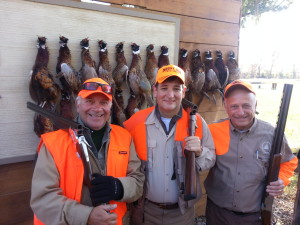 The delegates selected from the 1st District one are Scott Gessler, Justin Everett, and Tony Sanchez. The trio won after hours of speeches, voting, and counting. More than 90 people ran and each one delivered 30-second speeches to those gathered at Church for all Nations in Littleton.

“It is a pretty good reflection of where we are in Colorado,” Sanchez told FOX31 Denver’s political reporter Joe St. George.

“I think voters are just angry and people just want someone who is going to mix it up and that person is Ted Cruz,” Everett said.

When asked if any of them would vote for Donald Trump if Ted Cruz cannot secure the nomination, Gessler said “I cannot foresee those circumstances at all.”

The Denver Post’s John Frank Tweeted a big piece of the puzzle–how exactly did Cruz lock down all Colorado delegates up for grabs yesterday?

The answer includes the support of Gun Owners of America, the hardcore gun-rights group that we saw in Colorado during the 2013 recall campaigns against state legislators who supported gun safety bills. GOA’s president Larry Pratt has a long history of far-right political activism:

“It’s astonishing to me that a guy who has gone to meetings with really stone-cold Nazis and white supremacists is a welcome lobbyist on Capitol Hill,” said Kenneth Stern, the American Jewish Committee’s expert on anti-Semitism and hate groups.

Pratt’s role in an important Republican campaign poses a graver threat than many realize, Stern said, partly because of his access to conservative members of Congress.

Pratt’s gun control activism “bridges the gap between the far right, anti-Semites, racists and members of Congress,” said Stern, whose book “A Force Upon the Plain: The American Militia Movement and the Politics of Hate” was recently published.

The overwhelming win showcased the Cruz campaign’s months-long efforts behind the scenes in Colorado, led by U.S. Rep. Ken Buck with help from grassroots organizations, Gun Owners of America and the Faith and Freedom Coalition.

As Donald Trump’s campaign has run aground after his irresponsible statements on a range of issues–most recently abortion–finally began to catch up with him, the flight to Ted Cruz is becoming more and more lopsided. If Trump fails to recover from this latest gaffe, it’s increasingly likely that Cruz will surpass Trump and become the GOP’s nominee–if not by outright delegate count than on the floor of the convention.

But for a host of reasons including what you can see above, far-right Ted Cruz as the nominee is a whole new disaster for the GOP. Where Trump had some ability to motivate unconventional voter blocs and throw some uncertainty into the makeup of the November electorate, we already know exactly who Cruz appeals to–and Cruz’s record makes it an easy bet that he will overwhelmingly repel general election voters.