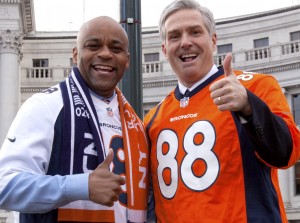 Denver Mayor Michael Hancock on Wednesday endorsed Michael Carrigan for Denver District Attorney. Carrigan is one of three Democrats running for the seat being vacated by the term-limited Mitch Morrissey.

Mayor Michael Hancock today announced that he is endorsing the only candidate in the Denver District Attorneys’ race who has experience as a prosecutor, defense attorney and private sector attorney – Michael Carrigan.

“Michael Carrigan is hands down Denver’s best choice for our next District Attorney,” said Mayor Hancock. “He is a skilled lawyer, active community member and strong leader with the legal experience needed to ensure justice for Denver’s residents. I am confident Michael will bring a balanced perspective to the DA’s office to help make Denver a safer, better place.”

The press release does not mention an interesting factual tidbit about Hancock’s endorsement: This is the first time that a sitting Mayor of Denver has endorsed a candidate for Denver District Attorney in at least 20 years. Some of this has to do with weird timing for both the Mayoral and DA races; Denver’s Mayor is chosen in a municipal election, but District Attorney is technically a “state race,” which puts it on the ballot in a General Election year.

As is normally the case here, Democrats will all but decide who becomes Denver’s next DA in the June Primary. There is an Independent candidate seeking the office, but running against a Democrat in Denver is kind of like being a Raiders fan on Sundays.