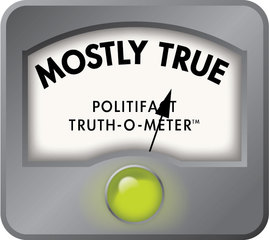 We wanted to check the accuracy of Emily’s List’s characterization of Coffman’s role in the legislation.

Coffman did co-sponsor the No Taxpayer Funding for Abortions Act, which attempted to redefine a ban on federal funding for abortions to exempt “forcible rape” — and not rape in broader terms…

7NEWS’ Alan Gathright, a veteran political reporter going back to the storied days of the Rocky Mountain News, correctly notes that Republicans did amend the bill under intense fire from, well, everyone with a conscience–but being amended by voice vote, there’s no record of Coffman’s agreement or lack thereof with the change.

And the bottom line: he was a co-sponsor of the original “forcible rape” language.

The record shows Coffman did co-sponsor the bill to redefine a ban on federal funding for abortions to exempt “forcible rape.” [Pols emphasis]

It’s important to recognize just how hard Coffman has pushed back on criticism of his record on abortion. In April of 2014, Coffman’s campaign successfully prevailed on Denver Post political news editor Chuck Plunkett to remove a story about Coffman’s abortion record that had already been published, claiming that the story “shouldn’t have run.” The story acknowledged Coffman’s shifting stand on abortion, but uncomfortably provided fresh coverage of what had been Coffman’s longstanding position–that is, no abortions, and no exceptions for victims of rape or incest. Much like now-Sen. Cory Gardner’s audacious deceptions on the issue in 2014, the response to any examination in the media of Coffman’s abortion record is feigned exasperation in public and aggressive bullying in private.

Well folks, it’s possible that in the new PolitiFact Colorado, we have an outlet that won’t be bullied. We’ll need to see more fact-checks like this one to be sure, but that would be a welcome–and sorely needed–development in Colorado politics.