Planned Parenthood Terrorist: “I’m a Warrior For The Babies” 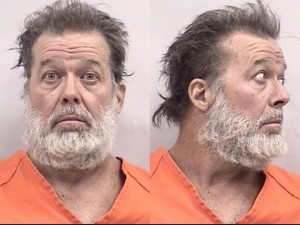 A dramatic day in court for domestic terrorist Robert Lewis Dear, who leapt to his feet during his arraignment hearing today to confirm his motives for his murderous assault on the Planned Parenthood clinic in Colorado Springs late last month. AP reports:

In court Wednesday, Robert Dear said the state public defender’s office wants to seal documents and limit discussion of his case to hide what he saw inside the clinic.

Dear shouted, “You’ll never know what I saw in that clinic. Atrocities. The babies. That’s what they want to seal.”

Dear noted that his attorney also represented Colorado theater shooter James Holmes. He says attorney Daniel King “drugged” Holmes, and “he wants to do that to me.”

…The man accused of killing three people at a Planned Parenthood clinic says he’s guilty and that he’s a “warrior for the babies.” [Pols emphasis]

In the immediate aftermath of the attack on Planned Parenthood in Colorado Springs on November 27th, abortion opponents flailed wildly trying to distance themselves and their summerlong campaign of lies about the organization from the shooter’s actions. Conservative media, followed by local social media voices and Republican elected officials all the way up to Ted Cruz, clung to any unsourced rumor about the shooter’s motives: that he was a “transgender leftist,” that he was a bank robber “gone wild,” and various other deflections. Even after news reports surfaced that Robert Dear had used the words “no more baby parts” when explaining his actions to police, investigators in ultra-conservative Colorado Springs were unusually slow to “speculate” about Dear’s motive.