“Violence begets violence,” Windholz wrote, concluding with a plea to pray for women who get abortions and doctors who perform them.

The comments sparked and angry backlash from supporters of abortion rights.

“She basically tried to justify the violence against (abortion) providers and Planned Parenthood, and there is no justification,” said Vicki Saporta, president of the National Abortion Federation, which represents about 400 abortion providers. 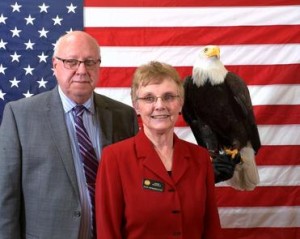 The reactions from Colorado Republicans to last Friday’s terrorist attack on a Planned Parenthood clinic in Colorado Springs have run the gamut, from heartfelt expressions of sympathy for the victims to defensive posturing and continued criticism of the organization. Even Rep. Gordon “Dr. Chaps” Klingenschmitt, who has routinely said things about Planned Parenthood’s “demonic spirit of murder” in the past that could be construed as incitement, unequivocally condemned the alleged terrorist “whatever his motives.”

But in at least one shocking case, as the Colorado Independent’s Marianne Goodland reports, a sitting Colorado lawmaker appears to directly blame Planned Parenthood for the mass shooting at their own clinic last Friday. And even harder to explain, it’s one of the most vulnerable GOP freshman members of the Colorado House of Representatives:

Adams County state Rep. JoAnn Windholz blames Planned Parenthood for the Nov. 27 shooting, at its Colorado Springs clinic, that left three dead and nine injured. She is one of the few Colorado Republicans to issue a statement in the wake of the attack.

Windholz referenced the Center for Medical Progress video that alleged Planned Parenthood and the Colorado Springs clinic were trafficking in baby body parts, the same video suspected shooter Robert Lewis Dear referred to in his oft cited “No more baby parts” statement after his attack.

“Planned Parenthood has no shame,” Windholz said. “These facts and overall mission of the abortion industry would easily send anyone over the hill who wasn’t rational.” [Pols emphasis]

We’ve posted Rep. JoAnn Windholz’s full statement after the jump. Re-reading it, we keep coming back to these words:

Violence is never the answer, but…

Folks, this is a sitting Republican Colorado lawmaker.

Violence is never the answer, but…

Rep. JoAnn Windholz was elected to her House seat in 2014 by the narrowest of margins, barely defeating incumbent Rep. Jenise May despite the biggest “Republican wave” elections in Colorado since Democrats retook control of the state in 2004. In the previous presidential election year of 2012, May had absolutely dominated the race, defeating her GOP opponent by 15 points.

All we can say is, when these nigh-on unspeakable comments about the Planned Parenthood terror attack find their way into ads and mailers against Rep. Windholz next year, she’s screwed. There is a strong likelihood that we will look back on this moment next November as the moment Rep. Windholz’s brief political career imploded.

Violence – Where it starts.

The freedoms we enjoy in the United States include those that were made up to fit the audience and unsubstantiated numerical support, specifically the right to an abortion. When a violent act happens at a Planned Parenthood (pph) facility (most recent in Colorado Springs) the left goes on “auto-pilot” blaming everyone insight when they should be looking in a mirror. Free Speech has brought to light the insidious selling of baby body parts (pph has no shame). These facts and overall mission of the abortion industry would easily send anyone over the hill who wasn’t rational.

The “war on women” is what pph began with Margaret Sanger and it has turned into a war on the family, especially children. It has changed children from a blessing to a commodity making it very hard to consider ourselves to be a civilized respectful rational society.
Violence is never the answer but we must start pointing out who is the real culprit. The true instigator of this violence and all violence at any pph facility, is pph themselves. Violence begets violence. So pph, YOU STOP THE VIOLENCE INSIDE YOUR WALLS. My question is, if abortions were free at pph, how long would they stay in business? Pro-Life organizations offer their caring services saving women and children for free every day and they clean up the mess that pph leaves behind.

Pray Daily for the women who abort, their children, and the providers.