Tancredo, a Republican who has long fought for tougher immigration standards, said he was glad to “start a conversation” about the risks of allowing Syrian refugees into the United States.

“I’m referring to the fact that this tragedy (in Paris), this horror, is something you cannot contain to one country is you don’t do something meaningful about immigration — a subject I’ve been involved in for some time — these are the kinds of things that result when you don’t protect your citizens,” he told The Denver Post.

Hickenlooper, a Democrat, was not amused.

“That’s beyond comment,” he said, dropping his shoulders after seeing the meme during a stop at The Post. “Come on.” [Pols emphasis]

As posted to former Congressman, gubernatorial candidate, and most recently “Coffmangate” co-conspirator Tom Tancredo’s Facebook page a short while ago: 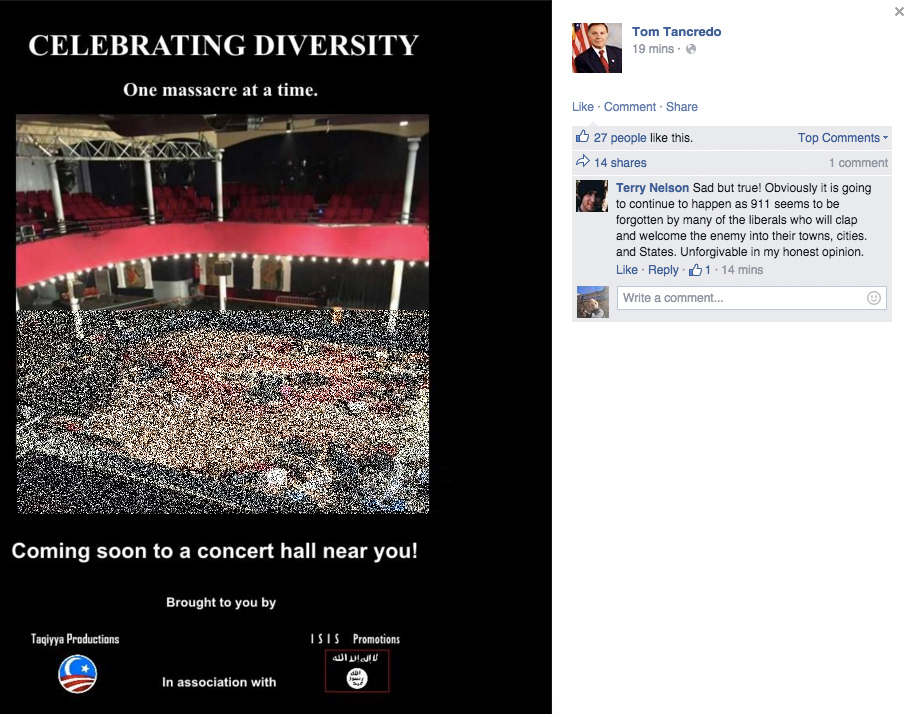 For the record, this isn’t the original image. We’ve digitally obscured what appear to be a number of dead bodies and streaks of blood in the highly gruesome unedited photo Tancredo posted. The photo appears to be the interior of the Bataclan Theater in Paris, France after the terrorist attacks last Friday. The caption on the photo, “Celebrating Diversity One Massacre At A Time,” may or may not have been added by Tancredo personally, but clearly that’s the message he endorses.

We’re pretty sure the original photo violates Facebook’s terms of service, so we wouldn’t be surprised if it disappears at some point soon. But as much as he frequently embarrasses his erstwhile fellow Republicans, Tancredo has a considerable following on the anti-immigrant right–and his views are representative of enough of the conservative movement that he can’t simply be ignored.

And folks, sometimes that is a damned shameful fact.