Hey Everybody: Enough With The Gitmo Cowardice Already

As the Los Angeles Times reports:

In the hope of persuading lawmakers to help him close the prison at Guantanamo Bay, Cuba, President Obama is preparing to unveil a plan to shutter the facility and move some of the terrorism suspects held there to U.S. soil.

Obama hopes to get Congress to grant him more flexibility in the law that prevents the Guantanamo detainees from being imprisoned in the U.S. and makes it difficult to send them to foreign countries.

The plan – expected to surface as early as this week – will propose one or more prisons from a working list that includes facilities in Kansas, Colorado and South Carolina. Two others that were on the list, in California and Washington state, don’t appear to have made the preliminary cut, according to a senior administration official familiar with the proposal.

Colorado Sen. Cory Gardner, who has been fearfully hyping a “pipeline of terror” that could target locals if detainees from the extrajudicial detention site at Guantanamo Bay Cuba were transferred to the Supermax high-security prison in Florence, Colorado for many years now, released another timorous statement yesterday in response to these latest reports:

“President Obama apparently has a secret plan to move dangerous terrorists from Guantanamo to American soil,” Gardner said. “He has thus far not shared that plan with the American people, instead choosing to employ anonymous leaks to White House correspondents. I wrote a letter last month asking the President about these efforts, and specifically why he was choosing to develop plans which fly in the face of the restrictions on Guantanamo transfers passed by Congress and which the President himself signed into law.

“I have received no answers from the Administration to my questions, despite the fact that numerous facilities in Colorado are apparently being considered for these transfers. If the President is determined to move terrorists to our state, Coloradans should know why and how he plans to do it. We’re waiting.”

Congress makes the laws, not you, @POTUS . Keep #GITMO out of CO. #COPolitics https://t.co/sv9pmPxohI 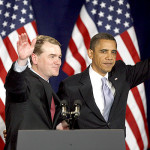 The possibility that detainees from the military-run detention center at Guantanamo Bay might be transferred to U.S. soil, in particular high-security federal prisons in Colorado, received renewed attention in recent weeks after federal officials toured ADX Florence and other locations to examine their suitability. But this is far from the first time Colorado has been considered as a Gitmo alternative–back in 2009, Gov. Bill Ritter expressed a willingness to transfer them to Supermax if that is what’s needed to close Gitmo’s widely-condemned detention center.

And yes, some local Democrats have not been as willing to cooperate at Ritter was back in 2009. Sen. Michael Bennet was attacked in September on the issue by the GOP-aligned America Rising PAC. The fact is, Bennet was squishy about moving Gitmo detainees to Colorado six years ago. But despite voting several times against expressly prohibiting such transfers, Bennet told the Denver Post that the Department of Defense “has no authority to transfer these prisoners.” Regardless, America Rising dismissed Bennet’s position as “empty campaign rhetoric.” Likewise, Democratic CD-6 candidate Morgan Carroll has been tight-lipped about bringing Gitmo detainees to Colorado:

Carroll’s statement to The Colorado Independent on the issue was rather succinct: “Obviously, nobody wants convicted terrorists moving into Colorado — or anywhere else for that matter.”

She did not comment on whether the facility should be shut down, what should happen to the detainees, or whether all people held in the facility are indeed “terrorists.”

In the case of both Republicans and Democrats, there is concern about what “due process” would look like for Guantanamo detainees on U.S. soil. With that said, there’s a fundamental difference between the two sides: Democrats who support some form of due process for these detainees, and Republicans who do not.

This key point is being lost in the latest debate over shutting down the Gitmo detention center playing out today, and there’s no nice way to say why: it’s because Democrats are afraid of standing behind President Obama on this issue. And that’s a big problem: scare tactics from Republicans over closing Gitmo serve chiefly to frighten Americans away from a sober discussion of why Gitmo needs to be closed.

The fact is, outside the bubble of jingoist Fox News propaganda, the Guantanamo Bay detention center is an enormous blight on our nation’s moral authority. By holding prisoners without trial and engaging in interrogation tactics that the entire civilized world has denounced as torturous, we have grievously harmed our reputation as a free and just society, and emboldened our enemies.

And you know what, folks? We’d much rather Morgan Carroll and Michael Bennet be talking about that, instead of repeating the same “not in my backyard” crap their Republican opponents are spewing. On this issue, Democrats should be standing shoulder-to-shoulder with President Obama, and they should not be–indeed they must not be–afraid of the fearmongering attacks Republicans will throw back at them. This is an issue where a small investment of backbone could pay big dividends–politically, as a unified Democratic Party would rally the large percentage of Americans who agree that Gitmo must close.

And also…well, morally. Because closing Gitmo, and restoring the rule of law after nearly 15 years of extrajudicial evils committed in the name of all Americans, is simply the right thing to do. We firmly believe history will reward politicians from either party willing to say so.