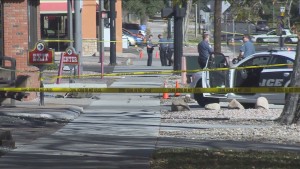 The man who neighbors say shot three people in Colorado Springs on Saturday made a rambling post to a brand-new blog two days earlier that railed against his father, religion and government.

Noah Harpham, whose blog begins with the address where Saturday’s shooting started, rages against a California mega-church pastor…

Saturday morning, neighbors say they watched Harpham go into the square-framed building with a military-style rifle and a can of gasoline.

Harpham came back out with a rifle and a pistol, neighbor Matt Abshire said. He gunned down the first person he encountered, Abshire said: a bicyclist on Prospect Street who died on a curb where flowers now lay.

Noah Harpham killed a total of three people in downtown Colorado Springs Saturday morning before being shot to death by responding CSPD officers. The two other victims were reportedly shot outside a home owned by a substance abuse recovery group that the shooter was familiar with. Despite the shooter’s reporter history of substance abuse treatment, we’ve heard nothing about how he obtained the “military style” rifle used in the shooting, or what extant or proposed laws might have prevented the crime.

Besides, you’re not supposed to talk about any of that–because that would be “politicizing a tragedy.” Two years ago, the Senator representing this area, then-Senate President John Morse, was recalled from office for helping pass 2013’s gun safety reforms–in response to, among other incidents, the Aurora theater shooting in 2012.

We’re probably not supposed to mention that either.