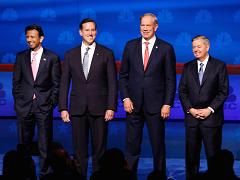 We’re a tad late to this here party, but we decided that we couldn’t just skip the “Junior Varsity” debate tonight, or as it should be re-named, “The Less-Than-One Percenters” debate.

Let’s fire up the Colorado Pols Debate Diary once again.

FINAL THOUGHTS
There is no reason to continue to have these second-tier debates. Who won the “Less-Than-One Percenters” debate? Does it matter?

Graham came off as both emotional and a little weird.

Pataki was the only candidate who actually sounded like he has reasonable economic ideas.

Santorum spent the night trying to convince Middle America to stay with him because he loves families and manufacturing.

Bobby Jindal is a clown. You could almost sense the audience tuning out every time Jindal started to speak.

Santorum: Announced for President from the floor of a Pennsylvania factory, so that proves he’s not just talk when he says he wants to build American manufacturing.

Jindal: “Thanks to the insanity and incompetence of the Democratic Party, Americans are ready to turn their government over to us.” Seriously? You’re aware that everyone hates Congress, right?

5:05 pm
We’ve got to be close to the end here. Oh, good, it’s the Lightning Round. We’re just going to mention things that jump out at us.

Jindal says he still doesn’t have an iPhone. Why do people think it makes them look good to talk about being technically inexperienced.

Pataki gets the biggest laugh of the night talking about being a long-suffering NY Jets fan.

Lindsey Graham says he wants to win New Hampshire, so “Go Tom Brady, go New England Patriots!” He might get punched in the face by a Broncos fan at the airport.

4:57 pm
More Jindal jibberish. Says Santorum can represent anti tax-cut Republicans if he wants, but that he (Jindal) will cut more taxes and reduce the federal budget 22% over 10 years. Nobody will have jobs, but they’ll probably be happy anyway, right?

New question for Graham, about convincing Americans to save more money. Graham might have nodded off there for a moment — it takes him a moment to get moving…and then he starts talking about how he knows beer, and grew up in a family of brewers, or something.

Graham sounds genuinely emotional when talking about saving social security, which he says “is the biggest issue facing this nation.” Guess Graham is trying to lock up the 75 and older vote.

Santorum: “If you look at my plan to blah, blah, blah, blah.” Says that unlike Jindal and Donald Trump, his economic plan will not add trillions in new debt.

Now Santorum is back on the family thing. Says the word “economy” comes from a Greek word that means “family.” We thought he was talking about yogurt. Targeting his comments to middle American families.

Good answer by Pataki, who says it drives him nuts that some in the GOP are questioning established science. Says vaccines are obviously safe. Says he wants Republicans to embrace innovative solutions, and that government should incentivize innovation. This might be the first coherent answer, from start to finish, that we’ve heard all night.

4:51 pm
Question about Jindal’s tax plan again. Jindal thinks all Americans should pay a minimum 2% tax so they have “skin in the game”; don’t other taxes, such as Medicaid, qualify as “skin in the game?”

Jindal says absolutely nothing meaningful in the next 60 seconds. How did this idiot get elected twice in Louisiana?

4:49 pm
We’re back, and the moderator opens with a question about Coors beer, which he says is “loved” in Colorado. Um, no, it’s not.

Question is about big beer monopolies. Santorum says we don’t have to worry about it.

Follow up question: What is the anti-competitive line in the sand? Santorum spends the next minute complaining about Obamacare.

4:41 pm
Moderator Carl Quintanilla takes about 90 seconds to ask a question. It’s so long, we forgot what Pataki is supposed to be answering.

Pataki says we have to grow our economy. Admits that Obama inherited a mess of an economy that has turned around, but Pataki says he should have done more.

Ugh, now a question about the Export/Import Bank. Seriously, Carl, stop talking. Nobody is here to listen to you ask questions.

Santorum goes into details on export financing. It’s about as compelling as you might imagine.

This actually happens: Graham says we need to cut corporate tax rates so companies won’t leave the United States…then he immediately pivots to talking about how he “really wants to help the middle class.”

Graham talks for so long that they finally just cut his microphone. That might not be a bad thing for Graham.

4:38 pm
The United States does not provide paid maternity leave. Question for Jindal: Should we do more to change this?

Jindal says yes, then spends the next minute contradicting himself. How does this man have even a fraction of a percent in public polls? Who listens to this guy and thinks, Now there’s a guy who should be President!

4:33 pm
We’re back from another commercial break, which included a commercial for FanDuel. Would it actually be possible to create a “dream roster” of politicians for a Fantasy Politics team?

The question is about immigration. Santorum is asked about how we would fix gap in his immigration plan that would make it difficult for companies to find low-wage workers. Santorum says something about how we need to train our own workers? What does Community College have to do with replacing manual laborers?

Lindsey Graham’s turn. He starts off talking about social security? CNBC really needs to stop showing these wide shots of the corner of the stage — Graham looks like he is about two feet shorter than Pataki.

Pataki dances around the immigration question by talking about vocational training.

4:26 pm
Question for Lindsey Graham: Are you in the wrong debate? (Meaning, many of your positions are closer to Democrats than Republicans)

Graham talks about how fixing Climate Change is important, whether you believe in it or not.   Then, somehow, we end up on immigration. “I am trying to solve a problem and win an election!” screams Graham. That was an awkward attempt by Graham to get fired up on-stage. What was he talking about, again?

4:24 pm
And…we’re still talking about tax policy, now with Pataki. You can almost feel people changing the channel all across the country.

4:22 pm
Next question for Jindal about his tax plan. Critics say Jindal’s plan to lower corporate tax rates is not actually possible.

Honestly, we’d try to recap, but Jindal has become a blubbering caricature of himself. He just stands there and shouts non-sequiturs.

4:18 pm
We’re back, and Jim Cramer has a question for Pataki about Chinese cyber warfare. Pataki’s answer is very similar to his prior answer — “President Obama’s administration has been the worst at ________”

Lindsey Graham: “Do you think Putin would be in Ukraine today if Ronald Reagan was President?” Um, yes?

Rick Santorum talks about manufacturing for what seems like 45 minutes.

4:12 pm
“Nonsense on a stick!” Man, we’ve had some good lines already, though this came from the moderator on a question for Jindal about inheriting a budget surplus as Governor and now leaving Louisiana with huge debts (“nonsense on a stick” is how Jindal’s budget is explained). Question is whether Jindal would do to America’s finances what he did to Louisiana.

“Absolutely, John,” says Jindal. Um, did he not hear the question?

Jindal goes into gibberish about budget cuts in Louisiana without getting anywhere near the point of the question — which is that many Republicans are even opposed to Jindal’s budgets because they are politically-motivated.

Time for a commercial break…

4:10 pm
“The key to poverty is families.” Santorum just argued that the real reason the middle class has fallen in America is because of weakened family values. It’s early, but Santorum is definitely winning the crazy vote tonight.

4:08 pm
Next question about the budget that saw early approval today in Congress. Jindal, Santorum, and Pataki all hate the budget (surprise!) Lindsey Graham is apparently supportive, but he just said that he would be the President who would best protect America after talking about a budget that makes drastic cuts to military spending.

First question about how you can connect with voters who are looking for an outsider.

Louisiana Gov. Bobby Jindal is wearing some sort of purplish suit and tie outfit. He says something that isn’t memorable.

Former Pennsylvania Senator Rick Santorum is saying something about how his insider experience is good because you need someone who can navigate Congress. That was weird.

South Carolina Sen. Lindsey Graham starts by thanking Boulder for a warm welcome, then makes a really lame joke about how he couldn’t have gotten into CU with his grades. Look, the joke would have been awesome in 1985.

Near the end of Graham’s statement, you could really hear the cavernous atmosphere inside Coors Event Center. It sounds empty.