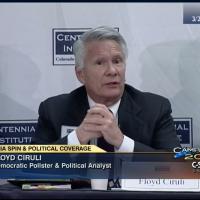 We took note a couple of weeks ago when an often-quoted “independent” Colorado political pundit, former SE2 principal Eric Sondermann, had what can be best described as a sexist meltdown via Twitter during the Democratic presidential debate–deploring Democratic presidential frontrunner Hillary Clinton’s “cackle” of a laugh, and suggesting that she and opponent Bernie Sanders “adjourn to a room upstairs” after Sanders came to Clinton’s defense.

Despite a wealth of eloquent opinionmakers available to ring for comment at any time in Colorado politics, some who might actually be plausibly considered “independent” for the purposes of fair-minded journalism, there’s a disturbing lazy tendency among local political reporters to rely heavily on two middle-aged white dudes whose opinions tend to be anything but “independent” (or, for that matter, “informed” or “useful”). We’re referring of course to the aforementioned Eric Sondermann and 9NEWS “analyst” Floyd Ciruli, who we affectionately call the “Tweedle-Dee and Tweedle-Dum of Colorado politics.”

The latest example of Ciruli’s special brand of “independent” skullduggery occurred on this weekend’s edition of Balance of Power. A show that often features some of the more insightful political reporting to be had on Denver TV, Sunday’s broadcast turned into an upsettingly slanted look at the Jefferson County school board recall. It didn’t help that host Brandon Rittiman and education reporter Nelson Garcia invoked the word “union” in just about every sentence, to the point of using the word as a substitute for actually explaining what they’re talking about. But Ciruli’s over-the-top union bashing dragged the conversation into downright silliness. In Ciruli’s view, neighborhood schools are “union-run schools,” and “fundamentally” the recall election is all about the evil teacher’s union’s desire to stop every good thing happening in education today.

Apparently it doesn’t matter a bit that the union and the school board signed a contract.

Considering the parents and other stakeholders that have no “union” affiliations whatsoever and are the faces of the recall campaign, and the fact that while some by no means all, or even a majority of funding for the recall campaign is from unions, yesterday’s Balance of Power was a bizarre capitulation to one side’s talking points. For all the respect we have for the reporters involved, it was not 9NEWS’ best work.

But for Floyd Ciruli, who may have run the Colorado Democratic Party back when they lost every election but today is a wholesale shill for very much un-democratic interests, it was par for the course.