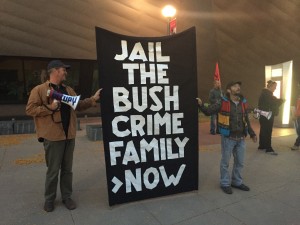 As top Republican donors, candidates, and opinion makers gathered at the Denver Art Museum for a “private” fundraiser featuring former President George W. Bush Sunday evening, ProgressNow Colorado, the state’s largest online progressive advocacy organization, condemned the secrecy surrounding the event and called on the former President to apologize for an administration broadly considered to be one of the worst in American history.

“Sneaking George W. Bush into Denver for a fundraiser with brother Jeb and cousin Colorado Treasurer Walker Stapleton makes sense given that Bush presided over one of the worst periods of recent American history,” said ProgressNow Colorado executive director Amy Runyon-Harms. “If Jeb Bush wanted to remind Coloradans of exactly why he is failing in the Republican presidential primary, all I can say is, “Mission Accomplished.'”

“Tonight’s fundraiser was organized by some of the state’s top Republican political operatives including the daughter of a former governor,” said Runyon-Harms. “Despite the fact that a who’s-who list of top Republicans are paying thousands of dollars for access to President Bush, his brother Jeb, and his cousin Colorado Treasurer Walker Stapleton tonight, news reports kept the location of the event, the Martin Museum Residence at the Denver Art Museum, private at the request of the organizers. [1] What does it say about the Bush dynasty that they’re afraid to even disclose where their fundraiser with our state’s richest and most powerful Republicans is being held?”

“A survey of presidential historians for the C-SPAN network ranked George W. Bush nearly last among American presidents on a range of topics including persuasiveness, crisis leadership, economic management, and moral authority,” said Runyon-Harms. [2] “Under George W. Bush, the nation endured the worst terrorist attack in our history, a huge loss of credibility after wrongly invading Iraq, and the biggest economic disaster since the Great Depression. If President Bush wants to raise money for a third Bush presidency in Colorado, he should start by apologizing to the people of this state for the massive problems he created while in office.”

“The last thing the people of Colorado need or want is a third Bush presidency,” said Runyon-Harms. “By sneaking George W. Bush into our state, the organizers of tonight’s fundraiser have proven that they know it.”