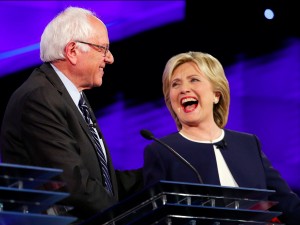 Multiple media figures derided Hillary Clinton’s laugh during the first Democratic presidential debate, calling it a “cackle” and “a record scratch.” During the 2008 presidential race, Clinton’s laughter was repeatedly attacked, despite criticism that such attacks were rooted in sexism.

During the October 13 CNN debate in Las Vegas, Clinton laughed after Vermont Sen. Bernie Sanders defended her from repeated questions about her use of private email by criticizing the media for fixating on the issue and saying, “The American people are sick and tired of hearing about your damn emails!” Clinton and Sanders shook hands as the crowd applauded.

The moment has been described by several outlets as a highlight of the night.

Here in Colorado, political pundit Eric Sondermann, who gets an inordinate amount of quote space from the local media as an allegedly “independent” political voice, had what we can only describe as a sexist meltdown on Twitter over Clinton’s moment of levity. Sondermann’s comments about Hillary during last night’s debate ranged from the moderately dog-whistle offensive:

To the wholesale demeaning of a former First Lady, U.S. Senator, and Secretary of State:

To be sure, Sondermann, like all these other male conservative pundit-class types, has a big problem with Clinton’s laugh–invoking that lovely “c-word” without hesitation:

But after Sanders came unexpectedly to the aid of Clinton on the matter of Clinton’s private email server, Sondermann appears to exhibit…well, a pubescent imagination.

So, maybe Sondermann had a little too much to drink before he jumped on the Twitters to “live-Tweet” last night’s debate? It’s very difficult to imagine him spewing all of this inexcusably sexist crap at the Democratic presidential frontrunner if he wants to retain his current position as the local media’s leading “independent” political quote machine. Any one of these Tweets would be worthy of scorn by themselves–to fire these off together in some kind of ragey stream of consciousness is a pretty clear demonstrator of how Eric Sondermann really feels about Hillary Clinton.

And arguably, women in general.