UPDATE #4: Rep. Mike Coffman sounds much more conciliatory today with John Boehner than when he complained earlier this year about House leadership foot-dragging on funding for the Aurora VA hospital:

Which one was Coffman, you ask? He’d rather not say.

“Although we did not always agree on tactics and methods, I appreciate that Speaker Boehner did his best to serve the American people,” Lamborn said. “I wish him well in the future and look forward to assessing the candidates who will step forward as the next nominees for speaker.”

UPDATE #2: We are working to confirm a report that now-outgoing Speaker John Boehner will appear at a fundraiser with Rep. Mike Coffman next Tuesday:

This was reported prior to Boehner’s announcement today that he will resign, so we have no way of knowing if this event will still happen. But Coffman’s difficulty juggling clear obligations to his district, from immigration reform to trying to get the wildly overbudget VA medical center in Aurora completed, with the often opposed interests of Boehner and GOP House leadership, has arguably been his greatest liability as he tries to hold on to one of the nation’s most competitive House seats.

And a visit from Boehner next Tuesday could throw that conflict into very harsh relief indeed.

UPDATE: Sen. Cory Gardner of Colorado effusive in his praise for John Boehner:

“John Boehner is a devoted family man, an exceptionally talented public servant, and one of the proudest Americans I know. One of twelve children, he went from sweeping the floors at his father’s Cincinnati bar to walking the halls of the Capitol as the highest ranking official in Congress.”

“He has lived the American dream, and been an inspiration to many, including myself,” Gardner wrote. “From my time in the House to the current day, I am proud to consider John Boehner a friend and ally. I will miss his steady leadership — our country is better off for his service.”

We’re watching to see who else in our delegation agrees.

On phone w/ @RepPerlmutter: “1st reaction was w/ words you can’t put on the air,” when he heard the @SpeakerBoehner news. #COpolitics #9NEWS 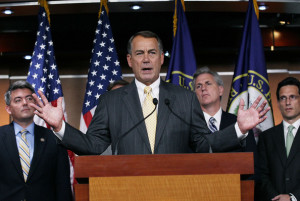 Stunning news out of Washington, D.C. this morning, The Hill reporting:

Speaker John Boehner told GOP lawmakers on Friday he will resign at the end of October.

The embattled Ohio Republican will resign from both his Speakership and his House seat, he told GOP lawmakers at a closed-door conference meeting…

“He is proud of what this majority has accomplished, and his Speakership, but for the good of the Republican Conference and the institution, he will resign the Speakership and his seat in Congress, effective October 30.”

Boehner’s decision comes as Congress struggles to find a way to fund the government.

Most sources report that Majority Leader Kevin McCarthy of California is the likely successor. With the dust still settling from this huge Friday announcement, we have yet to see reaction from our local Republican members, or any firm reports about what this means for the unresolved battle over funding the federal government past the looming October 1st shutdown deadline. Did John Boehner just defuse a metaphorical time bomb, or get himself out of the way of an impending train wreck? We’ll know soon.

Watch this space for updates on both of those angles as they come in.