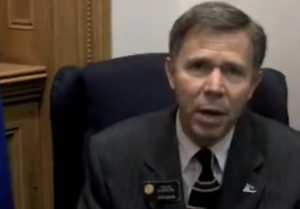 UPDATE: The Denver Post’s John Frank asked Lundberg Friday whether he’d back a Colorado clerk who denied same-sex marriage licenses. “I believe that they have that responsibility as an elected official to ask themselves, am I fulfilling my job or not,” Lundberg told The Post. This comment may have led, in part, to the Post’s editorial today pointing out that Lundberg “appears confused about whether state officials can ignore laws they don’t like.” The Post called Lundberg’s stance “disturbing.”

In a string of Facebook posts beginning Sept. 3, Colorado State Sen. Kevin Lundberg hasn’t been shy about his support for Kentucky Clerk Kim Davis, who landed in jail after giving marriage licences to some loving couples but not others.

Who would expect Lundberg to be shy, given his uncompromising stances on social issues in the legislature? But he is a state senator, which is why his fringe view should be aired out by reporters and others. To wit:

On Facebook, Lundberg wrote that Davis is “abiding by the laws of God and man. The Supreme Court and their inferior courts are the ones in violation of the rule of law.”

Good for Kim Davis, the Kentucky county clerk who is refusing to issue “marriage” licenses on the grounds that it violates God’s law, and her conscience.

Have the Federal judges become kings and queens who can fabricate law out of thin air and then throw state government officials in jail for daring to oppose their plans? What Constitutional authority does the Federal Court have to jail this elected official for exercising her best judgement in fulfilling her duties as county clerk? If the people who elected her want her to change, they can speak through any recall procedures the State of Kentucky allows, or vote her out at the next election for county clerk, but the Federal Courts should stay out of areas of law clearly reserved for state jurisdiction.

The courts have certainly seized this power and demonstrated their autocratic intentions long ago, but they do not derive this authority from the Constitution, which is the law of the land.

In my opinion the clerk is abiding by the laws of God and man. The Supreme Court and their inferior courts are the ones in violation of the rule of law.

In a post last week, Lundberg addresses the question of why Davis shouldn’t just resign: